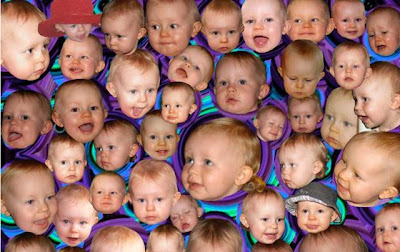 As I have been studying some areas associated with the 7 astral planes and various spiritual ethers, I have bumped across some articles that touched upon the notion of spirits in heaven waiting to be born. You often see pictures of God in Heaven shown with tiny baby angels surrounding him. While I have not found much on this topic and certainly nothing biblical, it stands to reason this notion could very well be true. After all anyone that has a good grasp on Yahweh, his Son, the Holy Spirit, demons and Satan are well on their way to “getting” the idea of the spirit world.

Further study, even on this site (see Gods vs. “gods” vs. Jehovah), demonstrates clearly that even the Bible itself discusses the notion of spirits in other dimensions. The Book of Job talks not only about (g)ods, but speaks of them in a commonplace manor. As shown in great detail in the second article of Gods vs. “gods vs. Jehovah: Part II – There is even a Divine Council of gods that meets with Yahweh God on a regular basis. Even Satan himself is occasionally invited. YES this is all BIBLICAL. Do Your Home Work! 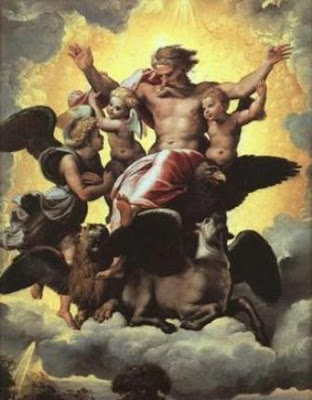 Once you begin to grasp this spirit world and its vastness you start to wonder about stuff. The other day I was thinking about the concept of spirits, created by Yahweh, (He LOVES TO CREATE WONDERFUL THINGS DOESN’T HE?), and imagined a bunch of baby spirits surrounding the Almighty. Since God created “MAN” in his own image, one must believe that means ALL aspects of that image. Since we know THAT is true then it must be safe to believe that the opposite is true. That is, the way we think and feel as “MAN” (woman & man – get over it), is the way that GOD the Almighty feels. He is us and we are him. So you should believe things like:

If you do not believe our GOD Jehovah is like this then I beg you take a closer look at the stories in the Bible. The only one I cannot confirm through stories in the Bible is #4; God thinks things are funny and laughs about them. I am not aware of a single time Jesus or Jehovah laughed about anything. Which doesn’t make sense to me, hence I simply accept they MUST LAUGH because WE LAUGH. Its just that simple. I don’t have time to over-complicate the concept with a deep dive study of apocrypha hoping to find some obscure reference that implies the Almighty has a sense of humor. Some things you should be able to INFER. The subtle art of inference is paramount to all understanding.

So even though I do NOT believe that clairvoyance is necessarily a gift from God, I acknowledge it MIGHT be. Its possible some of these “gifts” of touching the spirit world are not all Biblical “divinity” by definition. I recall a story in, (I think), second Samuel where Saul the “soon to be appointed” King of Israel intended to go and visit a “SEE’ER“. That would be an ORACLE! So was Saul intending to do a demonic thing by visiting a see’er at that time? Are all Oracles and SEE’ers demonic? Would King Samuel have told Saul that “HE” was the see’er that Saul was looking for if going to visit a see’er was demonic in the first place. I know, this gets confusing.

At this point my conclusion regarding see’ers and Oracles is that perhaps, just perhaps, not all of them were demonic minions of Satan. But that’s a tough one for me to fully embrace because when I study most See’er and Oracles recorded in HISTORY it is pretty easy to zero in on characteristics that confirm their demonic allegiance. So I am jaded to believe that anything “See’er, clairvoyant, and Oracle-LIKE” is automatically demonic.

See this article (Jehovah and the Zodiac Gods) on Tribulation Now regarding Zodiac, Greek gods depicted in the Stars by Yahweh, and Lucifer’s theft and forgery of the Zodiac for demonic purposes.

So with that being said I introduce you to the notion of Spirit Babies. Below is an introduction to the book with the same title. It is written by a self proclaimed clairvoyant. I did not see him as being demonic in nature until he mentioned the chanting activity which is absolutely demonic.

Demonic or not, divinity or not, this story is cute and can bring a tear and a smile to your eye. But to get that “good feeling” you have to do everything you can to NOT THINK OF OBAMA AND PLANNED PARENTHOOD. The implications are gruesome. SO STOP IT!

NOW FOR A HAPPY STORY

One of the most fascinating and gratifying aspects of my clairvoyant practice has been my work with spirit babies. I discovered my ability to see and converse with spirit babies in a most unexpected way. In the first years of my clairvoyant practice I was in the habit of taking an annual retreat on the north coast of California . I would rent a cabin in a remote location and spend my time hiking, chanting, and meditating. It was common for me to go days at a time without seeing or speaking to another person.

One evening after a particularly long hike I returned to my cabin with the sole intention of falling asleep. I was just settling into bed when I began to feel a warm presence floating over my chest. Focusing clairvoyantly I immediately noticed a bright green oval hovering just inches in front of my face. The energy inside the oval swirled about in an animated fashion, the dominant green at times partially obscured by patterns of gold and purple. The whole oval pulsed rhythmically like a beating human heart. I knew intuitively that the presence was some kind of spirit but its energy was unlike any I had encountered before.

Most spirits have a distinctive energy signature. The spirits of the dead for example often have a “cold” quality to their energy. This is why many people experience a chill when these spirits are present. Angels, spirit guides, teachers, and other non-incarnating entities have a detached quality which often makes them appear unaffected by the travails and emotions of humankind.
The presence of this spirit filled the room with a joyous animated energy that reminded me of children at play. I was beginning to get lost in happy memories of my own childhood when a young girls’ voice startled me from my reverie.

“You’re not my father.” I refocused on the spirit. The oval had expanded to twice its original size and was now floating about two feet above me. Inside the oval the green energy had formed itself into the figure of a young girl about 7-years-old. A cord of gold energy connecting the oval to my fifth chakra located in the center of my throat allowed me to hear the telepathic communication. The appearance of the girl and her statement concerned me. Children who are lost often seek help psychically. The very present, human quality of the spirits energy made me wonder if this was the case here. I introduced myself to the spirit, confirmed I was indeed not her father, and asked if she was lost.

“No I’m in the right place,” the spirit replied. “I’m supposed to meet my father here.”
“What’s your name?” I asked.

“I don’t have a name yet. My father’s name is Frank. He’s going to bring my new mother here to meet me. When I’m born I’ll have a name.”
“Why are you waiting here?” I asked.

I tried to ask another question but the spirit stopped me.
“I need to go now,” she said shyly.

With that the image of the young girl dissolved into the green oval and the spirit began to move away. As she disappeared I could discern the oval outlines of many spirits shining in the distance. The distant spirit babies began to move towards me. Their floating movements seemed choreographed as if they were slowly dancing through space. Each distinctive green oval surrounded a unique multi-colored pattern that swirled and pulsed as they moved. Periodically when one of the spirits would approach very close to me I could read elements of its personality. I would greet them and try to ask a question but they were intent upon the dance and my efforts were ignored. Finally, as if on cue, the dance came to an end and the ovals were still. The shining lights of the spirit babies looked like a constellation of multifaceted starts in the night sky.

The exhaustion of my long hike was gone. My first encounter with a spirit baby left me full of wonder and curiosity. A whole new dimension had opened up to my clairvoyance. I was determined to learn more about these spirits and the world they inhabited. More immediately however, I wanted to know if the spirit’s story was true. Was there a man named Frank? Was he coming to the cabin with his new wife? Intuitively I believed what the spirit told me, yet some part of my mind wanted to find a way to prove her story.

My retreat time ended. I was paying my bill at the innkeeper’s office. We were exchanging pleasantries when she asked me what I did for a living. After I told her I was a clairvoyant she joking asked me if I had seen any spirits “haunting” the cabin.
“Well,” I replied. “I didn’t see any ghosts but there are quite a number of spirits that wish to become babies floating around the place.”

The woman laughed, “It’s funny you should say that. For years people have been telling me the cabin is their lucky spot. Couples are always going up there when they want to have a baby. Maybe that’s the reason.”

The turn of our conversation seemed more than just coincidence. I just had to know.
“Is there a couple renting the cabin after me?” I asked.
“Why yes,” she said. “They’re on their honeymoon.”

The phone interrupted our conversation. As she turned to answer it, I noticed her reservation book open on the desk. Frank and Mindy were arriving that evening.

SEE THIS ARTICLE FOR MORE INFORMATION: