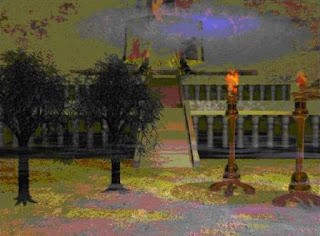 Only Thinking Out Loud
Could the Jews & The Christians Be the Two Witnesses for Our Lord?

This article is just me thinking out loud.  In most respects these ideas are more or less rhetorical in nature.  Frankly the discussion of the “two witnesses” and who “they are” is one that will drive most Christians nuts.  It is very complex and has been “beaten to death” for hundreds of years by Ph.D.s and advanced theologians.  Just publishing these ideas gives me the “look out” feeling since it is potentially explosive in nature.

But I thought it might be “interesting” to present another look at who the “two witnesses” might be in lieu of so much of this other highly controversial information that has surfaced to our readership as of late.

For example, we know that the “New Age” / Luciferians will be trying to usher in their one world religion and probably present this Maitreya “entity”as their new “Jesus” (more thoughts on that later in a future “Alien Demon Agenda” article).   And we also know that the Jews and the Christians are the ARCH ENEMY of the Luciferian “rebellion” right?  There is absolutely NO DOUBT that the forces of evil and Lucifer’s army HATE two groups of people more than any others.  Jews and Christians.  The “seed” of Adam.   The “seed” of Abraham.

Who is the Godhead?  Isn’t Jesus God?

This concept, I realize, potentially opens up a “can of worms”.  But it had occurred to me that most Christians agree that Jesus is God.  Right?  We have adopted this concept of the “trinity” which is made up of YHWH God, His son Jesus and the “breath of God”, the “restrainer” or Holy Spirit.

Now never mind the fact that the word “Elohim” could possibly mean there are more to this “Godhead” than just these three.  We “assume” that “Elohim” simply means the “Father, Son and the Holy Spirit”.  It is only an ASSUMPTION.  And you know what that means … right?

When Jesus said “there is no way to the Father but by me”, and you realize that Jesus is part of the “Godhead” it does make you think … doesn’t it?  After all, most Christians accept that “Israel” are God’s chosen people and YHWH intends to give them a “divine hall pass” of some sort … right?

Sometimes I wonder, since Jesus was there at the time the Universe(s) were created, and has been part of the “godhead” since the “beginning”, if there is “more than meets the eye” here.  Surely YHWH God is not going to send all the dead Israelites to Hell because they didn’t go to the Father through Jesus, is He?  If you cannot get to the Father but through Jesus, what happens to all the people who loved YHWH before Jesus was born?  Are they all condemned to the judgement and possibly Hell?

Makes you think … doesn’t it?

THE TWO WITNESSES … Might Be?
Thinking Out Loud about Revelation 11: 3-13

Here below I have included my “thinking out loud” thoughts on the “Two Witnesses” in light of some of the recent knowledge we have about our “enemy’s” master plan and this New Age / Luciferian ecumenical movement.

My “thinking out loud” comments are in the “gold color”.

Please Note:  These are only ideas.  I am not presenting ANY CONCLUSIONS.  Please consider all of my “comments in gold” to be only “thinking out loud” thoughts.  If you have ideas about my “thoughts” you can email me if you would like.  But please don’t go “theological” on me and give me a hundred reasons why this cannot possibly be correct because it will fall on deaf ears.  Again these are only “ideas” to consider.  I have heard all the Moses, and Elijah arguments until I’m blue in the face.

And I will give power to my two witnesses [Holy Spirit Power], and they will prophesy one thousand two hundred and sixty days [3.5 years, using the Jewish 360 day year], clothed in sackcloth [clothed in sackcloth is symbolic for under-persecution].”

4  These are the two olive trees and the two lampstands [Watch OUT here… Olive Trees and Lampstands … I wonder if this is the JEWS (olive trees) and Christians (Lamp Stands) – this would make sense as both Jews and Christians are WITNESSES FOR YHWH GOD who is JESUS “godhead” get it?] standing before the God* [should be “Lord”] of the earth [which is Satan]. 5 And if anyone wants to harm them, fire proceeds from their mouth and devours their enemies [This may be symbolic – fire devours them because YHWH is going to destroy those who resist His word with Fire, the Holy Spirit is Fire, fire for them = death]. And if anyone wants to harm them, he must be killed in this manner. 6 These have power to shut heaven [only followers of YHWH / Jesus have the power to shut heaven], so that no rain falls in the days of their prophecy; and they have power over waters to turn them to blood [Similar to Moses], and to strike the earth with all plagues, as often as they desire[Similar to Moses],.

7  When they finish their testimony, the beast that ascends out of the bottomless pit will make war [war takes time – the Jews and Christians are murdered en masse] against them, overcome them, and kill them [Wow – this is exactly what Matt. 24 says about the followers of Jesus isn’t it?] 8 And their dead bodies will lie in the street of the great city which spiritually is called Sodom [abomination committing countries? – US if it is still around then but probably not] and Egypt [ISLAMIC States], where also our Lord was crucified [ISRAEL]. 9 Then those from the peoples, tribes, tongues, and nations will see their dead bodies three-and-a-half days, and not allow their dead bodies to be put into graves [The slaughtered Jews and Christians are left to lie in the streets because people HATE THEM]. 10 And those who dwell on the earth will rejoice over them, make merry, and send gifts to one another [happens around Xmas pagan gift giving perhaps], because these two prophets tormented those who dwell on the earth [The Jews and Christians, e.g. YHWH’s witnesses, HELD THEIR GROUND and told everyone that Maitreya was NOT GOD!! – GET IT?? The “Jews and the Christians” refused to accept the New Age religion. They are the “arch enemy” of Lucifer’s army. They are the final hold outs of YHWH and Jesus. The Jews and the Christians, First the Saturday People THEN the Sunday People].

11  Now after the three-and-a-half days the breath of life from God entered them, and they stood on their feet, and great fear fell on those who saw them. 12 And they heard a loud voice from heaven saying to them, “Come up here.” [RAPTURE HERE MAYBE?] And they ascended to heaven in a cloud, and their enemies saw them. 13 In the same hour there was a great earthquake, and a tenth of the city fell. In the earthquake seven thousand people were killed, and the rest were afraid and gave glory to the God of heaven.

JUST SOMETHING TO “CHEW ON”
BE BLESSED IN JESUS NAME!

19 thoughts on “The Two Witnesses Revisited”