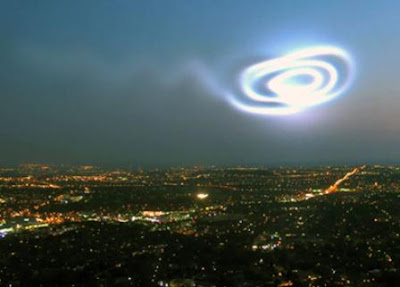 Spirals are Wormholes
Expand Your Mind and View the Evidence

This morning in Jesus Name, I will try to present to you some information which is challenging to grasp even for myself from a “historical sense”.  Quite frankly I haven’t spent enough time on this one subject to develop any reasonable expertise.  In this case I am referring to purely the “historical” component.  The “wormhole” part is not too difficult for most people to embrace.  It is the history behind the appearance of these “spiral-wormholes” that is nebulous at best.

And DON’T FORGET these “spirals” are found in extremely old “petroglyphs” warning of global calamities and horrible flooding complete with “devil like” creatures pointing to them and people fleeing into the mountain tops.

You can see these petroglyphs and much more pertinent data at www.rabbithole2.com/video.htm

Ancient Aliens and Ages of Time

Ancient alien research tends to go back to times that “predate” earth as we know it today.  This delves into the times of “dinosaurs” and arguably before YHWH God “breathed soul and spirit” into Adam in Genesis 2:7.  This topic is one of much debate amongst those that speculate therein.  It includes the notion of “world ages” and “thunders” and implies that “spirit breathed” man on earth, is only a small part of the overall existence of this “age or aeon”.  It further implies and argues that these prior “ages” may have included vast civilizations and intergalactic travel during the times of Atlantis and Lemuria.

The exact timing of such “existence” is speculative at best.  Most advanced researchers, (even those who do not believe in our King Yeshua Jesus the Messiah, and our God YHWH or Ya va El / God of Gods, e.g. Our Heavenly Father), indicate that a global “flood” happened around the “times of Noah” and definitely destroyed virtually all (but not 100%) of the evidence.

Dinosaur bones are everywhere.  The earth’s strata and crust shows geological evidence of all sorts of anomalies and times arguably from millions of years ago.  The period of Genesis One alone could include all these “millennia” revealing only a symbolic representation of these “aeons” at best.  This is extremely evident when studying Genesis 2:4 which states:

Genesis 2:4
These are the generations of the heavens and the earth, when they were created in the day of the making of Yahweh Elohim’s earth and heavens.

Here you see a verse which SHOULD have been the conclusion of Genesis One but was not.  This is most unfortunate since the reader tends to close out their notions of the “ages” of creation at Genesis 1:31.  That’s okay.  Again the primary purpose of the Bible is a roadmap to “salvation”.  Hopefully we are able to “at least” wake folks up to understand that the forthcoming intergalactic onslaught is targeting their “souls” and spiritual existence.

Going after people who are already “technically saved” (e.g. in the churches) is almost certainly a waste of precious time at this point.  In fact I would argue many of the “so-called churches” will eventually become the worst enemy of those who do indeed understand what is happening when “all Hell” breaks lose here on earth.

The Spirals are Wormholes

Many of us have speculated that these “cosmic disturbances” seen as “spirals” (such as the infamous “Norway Spiral”) might have been “star gates” or perhaps “wormholes”.  Well I am absolutely positive they are space craft moving into “light speed” and entering a type of “wormhole” created by this event.

Average Scientists are Waking Up

Many scientists are beginning to wake up to the notion, through Quantum particle physics, that we live in a “light-based” spectrum that is held together through electro-magnetism.  Physicists were recently “mind blown” to discover that a single “light particle” was present in two different physical locations at the same time.  This destroyed the notion of “light speed” and jettisoned the theories into “time dimension” portals instead.  When coupled with the “proof positive” research behind the “Tesla-Alien-Esque” technologies of the Philadelphia Experiment and the Montauk Project (and others), it reached a point where the “Black Ops / Reptilian” entities were even presenting their known sciences through movies like Contact with Jodie Foster.

Of course the average human “on-looker” sees this as creative science fiction, when the Scientologists and upper echelon of the “elite” and Illuminati see it as obvious FACT, considering the average Christian and Jew as being “sheep” led to the “slaughter”.  And indeed, many shall be.  So sad.

Here is the video of this “intergalactic space craft” swinging downward toward the earth’s surface and then shooting up into the atmosphere creating a wormhole and multiple “sonic booms” as “light particles” swirl and expand into a luminous light “spiral”.

If you have a good sub-woofer on your computer sound system, I recommend you turn it up loud so you can hear this “jaw dropping” effect as the craft “breaks into” the other “dimension”.

Here is the direct You Tube Link:
http://www.youtube.com/watch?v=Hfy2JMcyMyA&feature=player_embedded

Key Snapshots of this Event Unfolding

Here I will include some key snapshots of this event unfolding for those who struggle with viewing You Tube videos.  A good friend of Tribulation-Now, Steve, has a link that will allow dial-up users to download and view You Tube videos for free.  (Steve would you send that link to me and I will forward it out to those who need it?) 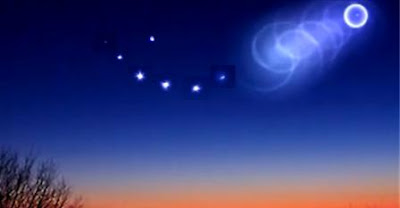 You will note in this picture that I did not attempt to hide the fact that I superimposed various images of this “space vehicle” as it swung down from the sky and circled up into atmosphere creating the side effect of this light-speed “vortex” or wormhole.  It was easier to show it to you this way then adding seven pictures to this article.

Here is a link to the web page that was sent to me which includes this video and more.
http://www.welcomethelight.com/2010/05/ufo-spiral-in-the-sky-seen-and-heard-across-western-canada-video/

The forthcoming intergalactic war is spoken of in great detail in 2 Esdras 15.  The references include language about “dragons” that fly in “chariots”.  Can you say “Chariots of Fire?”.  Interesting.

Where the nations of the dragons of Arabia shall come out with many chariots, and the multitude of them shall be carried as the wind upon earth, that all they which hear them may fear and tremble

Don’t forget that the Books of Esdras were in the original 1611 King James Bible and later removed by the pagan filth that wanted to keep the sheep heading directly into the “slaughterhouse”.  Amen?  And don’t forget the Angel the was “delayed” for 21 days when coming to give Daniel the news about the end of the Babylonian captivity.  This “cosmic entity” was referred to as the “prince of Persia”.  Wow.

Here is included a video entitled “*ALERT* Space Vehicle *ALERT*” posted on You Tube at this link here: http://www.youtube.com/watch?v=zvG0xKSaHOo

And here below is a zoomed in and enhanced image of this space vehicle which appears to be extremely large when compared to the nearby image of the Sun which is is hovering near by. 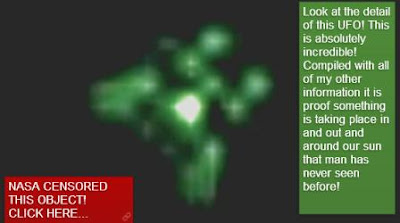 Here is this “intergalactic space craft” shown nearby the Sun of our solar system in the upper right of the screen prior to “zooming in”. 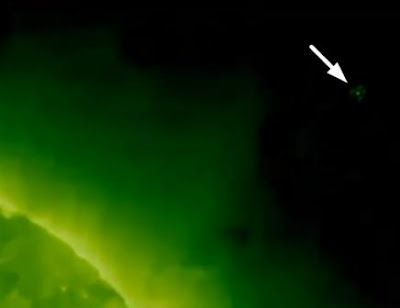 When you consider the size of our sun and the distance in relationship to this “space vehicle”, you suddenly realize this “craft” is extremely large.  This isn’t just a “mother ship”.  Indeed this is a Bahama Mama Mother Ship!  It is HUGE on a level that the movie “Independence Day” didn’t come close to capturing.

More Ships Hiding Near the Sun

I have already done articles in the past that capture the fact the folks are using 3rd Generation Night Vision Optics to watch UFO Wars in the earth’s atmosphere at this time.  Here is a link to a Coast to Coast AM show with the pioneer of this new “fad” named Ed Grimsley.  (http://www.youtube.com/watch?v=0yn47UJ4sOA).

All you have to do is search on “UFO wars” in Google or You Tube and you will find tons of this stuff.  These people are investing well over $3,500 dollars into these optics and cameras.  They gather in large groups to watch and film live UFO battles taking place in our atmosphere every night.

Who do you think are involved in these fights?  Could it be “The Federation of Light” verses the earth based “Black Ops” UFO’s of the reptilian fleets made by our friends at Boeing?

Or could there be MORE to this story? 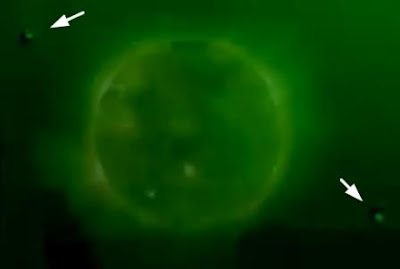 For your intergalactic enjoyment, here I have included a snapshot and video link of many “space buggies” that believe they are hiding around the Sun’s emissions.  Of course as you will see, when leveraging the UV imaging systems and some photo-enhancement technologies, for those with eyes to see, their hiding spot is not so effective.

Here is the direct You Tube video link:
http://www.youtube.com/watch?v=VR16L1UE9Fs&feature=player_embedded

I didn’t used to think that “Chariots of Fire”, and “Clouds of Heaven” were references to intergalactic and dimensional travel technologies but now I do.  While I put NO LIMITS on the power of our Heavenly Father, it seems we have been bamboozled by ignorance and misinterpretation of symbolism for a very long time.

As Zen Garcia of FallenAngels.tv says often, “there are underpinnings of truth” in all ancient writings, and oral traditions” of all civilizations both ancient and modern.  Of course the challenge will always be to stay focused on Yeshau Jesus our Messiah as the King of Kings and the Lord of Lords, knowing behond a shadow of a doubt WHO’S SIDE YOUR ON!!

I will leave you with these verses to consider.

For the time will come when they will not endure sound doctrine, but according to their own desires, because they have itching ears, they will heap up for themselves teachers; 4 and they will turn their ears away from the truth, and be turned aside to fables. 5 But you be watchful in all things, endure afflictions, do the work of an evangelist, fulfill your ministry.

What is your ministry?  Are you a disciple for Jesus, or are you just hanging out waiting for Yeshua’s “rescue mission”?  Have you downloaded these videos of Planet X and started showing “the Lost”?  Do you tell the person at the 7-11 to “Be Blessed in Jesus Name” after you pick up your morning coffee?

I do.  Praise Jesus.

We really all need to start planting as many “seeds” as we can.  Praise God for each and every one of Tribulation-Now’s contributors for sending out the “global intelligence” as it comes in.  I tip my “Heavenly Hat” to everyone who is doing their best.  Praise God for all the watchmen of the world.  The church “goers” are not going to listen.

There is a reason why God said “I shall separate the SHEEP FROM THE SHEEP”.

SPREAD THE GOOD NEWS OF YESHAU JESUS’ RETURN
THE SIGNS IN THE COSMOS ARE HERE AND NOW
PLANT SEEDS EVERY CHANCE YOU GET
SEEK THE BAPTISM OF THE HOLY SPIRIT WITH ALL YOUR HEART
JESUS IS COMING!!
REAL REAL SOON!!

And most of all …. BE BLESSED IN JESUS NAME