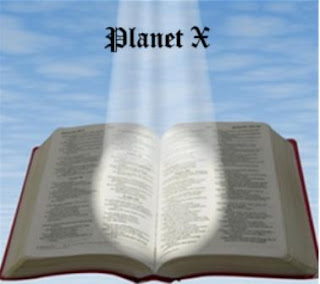 The History and The Word
An Outstanding Expose by Pastor Francis M. Riley

As many of you know, I have made a significant investment over the last 6 or more years in books, lectures, teaching sets, DVDs, documentaries, and Bible Study software.  A good number of the books and study material I’ve collected target the subject of Nibiru, Tyche, or more commonly … Planet X.

In fact, I never study the work of a single source.  I make it a point to study all sides of the story.  For example, I will buy books and lectures from scientists who do not believe in God at all, then I will study the ancient mystery religions and see what they have to say.  I will even hunt down the warnings from the New Age “Plieadian Channellers” and compare that information with the “star god” hybrid folks that are surfacing at an alarming rate across the Internet on talk shows and video news interviews.

As long as you anchor yourself solidly in the power of Jesus Christ through the Holy Spirit of YHWH God the Most High, the El Elyon, and you keep your “spiritual channel changer” locked on to the Yahushua Frequency (7777.777 Mhz), it is reasonable you will come out of your study with “no fear, power, and of a sound mind” (2 Tim. 1:7).  Moreover, when you realize the enemy’s true target is the demotion of YHWH the Almighty, and Yahushua Jesus our King, then it becomes more than likely that the forces of darkness have underpinnings of truth in virtually everything they are saying.

With these revelations come Godly empowerment.  The fear of being misled goes away.  You know who your King is and you worship Him in “spirit and in truth”.  And ultimately you await His return like a giddy bride, ever watching, ever prayerful, talking to Him as if He sits right beside you (which He does), “anxiously awaiting the transformation of your body” and your eternal reign with Him in the Heavens … once again.

Honestly I don’t know very much about Pastor Francis Riley.  And quite Frankly I take care not do dive into an Internet search on anyone these days since the foul mouth demon possessed rule the Internet and disparage all that is Holy.

I will say that I have seen tidbits of dialogue between an older and wiser member of Tribulation-Now’s family and him.  Evidently Pastor Riley had quite a following many years ago of incredibly loyal Holy Spirit filled people.  In fact, Tribulation-Now’s email list member “Willow” was jumping through hoops trying to get back in touch with him.  Others wanted to say “hello” too.

Reportedly Francis had endured some medical challenges and had to drop out of the public eye for awhile. But he is back once again doing God’s awesome work LIKE NO OTHER!  My understanding is that he is in his 80’s now (just found out he’s 76 Amen), and living near some of his family.  And he continues to write Bible studies and awesome work that is cutting edge and beyond the “mental capacity” of most “so-called” Christian teachers out there — particularly when it comes to the REAL issues of today.

LET ME GIVE YOU AN EXAMPLE

Recently I wrote an article entitled “Motherships Arriving”.  Pastor Riley doesn’t “know me from Adam” … Amen?   I am just a regular guy who just turned 49 years old.  I never pastored a church in my life – PRAISE THE LORD!  I never attended a Theological Institute in my life – PRAISE JESUS.  In my personal opinion, if you learn what “other men think” then it instills unbelief … period.  The more letters you have after your name, the more “puffed up” you become, and the more you believe your own BALDERDASH.

My favorite verses in the Bible are those which speak of “mysteries” and give “special warnings” (like “let the reader beware” and like “woe woe woe”).  Those are the exciting verses to me … and those are the one’s the “theologians” will almost always get incorrect.

“Because it has been given to you to know the mysteries of the kingdom of heaven, but to them it has not been given. 12 For whoever has, to him more will be given, and he will have abundance; but whoever does not have, even what he has will be taken away from him.

Note clearly here it says that when you figure out a particular “mystery” with an open mind, God will give you more.  But when you approach God with a predisposed believe burned into your head by the Moody Bible Institute, you get …. CUT OFF!

So what “mysteries of the kingdom” do you supposed the apostles were given?  Do you believe ALL those mysteries are in the Bible?  If you do, I personally think you are one gullible goof-ball.

25 And there are also many other things that Jesus did, which if they were written one by one, I suppose that even the world itself could not contain the books that would be written. Amen.

22 And Moses was learned in all the wisdom of the Egyptians, and was mighty in words and in deeds.

What in the WORLD do you think Moses knew?  The Egyptians had “hybrid human animal gods” carved in their temples.  They performed blood sacrifice rituals and turned water into blood.  These were some serious black magic star-god freaks..  And Moses knew ALLLLLLLL their wisdom and deeds.  Wow.

Correctly assuming the Bible is an understatement, you would have to be completely clueless not to understand the connotation of that remark.  And why even bother putting it in the New Testament in the first place.  The statement seems out of place.  Or maybe …..

And never mind all the scrolls and mysteries that God ultimately told his prophets and seers to “put away” and events they should “not write down”, etc.

Pastor Riley’s Commentary on “The Noise”

Now here is an example of how ALL pastors should be.  Again I remind you I have no idea who Pastor Riley is and can only tell you I have read his material and it seems astonishingly accurate, open minded, and scripturally sound.  If my guess is correct, Francis Riley has taken a number of verbal thrashings over the years for “speaking the truth”.  And I would be honored to pass him the “mashed potatoes” and “roast beef” at the Marriage Supper in Jesus Name.

Pastor Riley wrote a document about “The Noise” which everyone has been hearing across the world lately.  It is mentioned in Joel Chapter Two.  How do I know?  Simple.  Joel 2 is talking about the “alien invasion” that’s coming to the earth.  It seems pretty clear to me.

10 The earth shall quake before them; the heavens shall tremble: the sun and the moon shall be dark, and the stars shall withdraw their shining:

Even Pastor Wilhelmsen at http://www.echoesofenoch.com/ , bless his heart, believes this indicates grey alien abduction activities.  Personally I believe its clear the entire chapter is talking about the forthcoming alien-demon invasion.  And notice that “the earth shall quake before ….” what?

“THEM“
This is what Pastor Riley wrote about my article entitled “Motherships Arriving” and “The Noise” in a section he entitled “speculation”.  That title makes me smile, but LISTEN to what this learned scholar says.
Speculation…..

Already some are speculating about various things which could cause this “sound.” Just today I have received emails from one brother stating his belief that UFO “mother ships” are arriving in various places all over the earth preparing for an invasion of the earth and a war. Yet no UFO’s have been seen or reported in connection with this “sound” that is coming from the sky. If this brother’s speculation sounds ridiculous to some of our readers, do YOU have a better explanation? It is most definitely happening in various places all over the world with thousands of people hearing it. Don’t be too hasty about speculations unless you are prepared to PROVE what is causing it. At this point this brother’s UFO speculation is as good as any.

Now again, Pastor Riley wouldn’t know me if I ran up and bit him on the … well … you “get my drift”.  So it was generous of him not to put the word “wild” in front of “speculation” … Amen?   Pastor Riley doesn’t know how much time I have studied this material.  And even if he did, it would only be fair for him to present a level headed analysis no matter what. Right?
The Major and Minor Prophetic Books in the 66 book Bible canon are rife with stories about what is going to happen in the very end of times.  And I am certain that those stories (not all, but many) include alarming descriptions of armies “from afar” that will KILL US.
And they aren’t from China or Russia folks.
Here below I am going to “reprint” Pastor Riley’s full 10 page Bible study on Planet X.  This is some of the best work I have ever read on this “phenomenon”.   Also at the end of this article, in the summary, I will include Pastor Riley’s contact information if you wish to communicate with him, or consider sending him a Jesus filled gift for his hard work.  I recommend you read this following verse below if you TRULY want to understand the concept of Christian giving.

Acts 2:44-45
44 Now all who believed were together, and had all things in common, 45 and sold their possessions and goods, and divided them among all, as anyone had need.
NKJV

Matthew 24:35.
“Heaven and earth shall pass away, but My Words shall not pass away,”