Listen to internet radio with John Baptist on BlogTalkRadio

I used to think only a few select people, a special group chosen of God, could hear His voice as part of their daily walk.  All throughout my life I’ve heard numerous Godly people say “the Lord told me” this or that.  Until the last few years of my life, I never really experienced hearing that “still small voice” (at least not with any confidence it was actually God speaking to me).  Through circumstances, over time, this has slowly changed and now I am much better at discerning when the Lord is speaking to me versus when I am “thinking” aloud internally. Knowing when the Lord is speaking to you is almost artistically intuitive.  And admittedly I have not perfected it.  It’s important to hone one’s ability to hear that “still small voice” (ref. 1 Kings 19:12) as it is arguably the most important way to hear God speak.  Unlike the other ways which have certain physical limitations, hearing that “still small voice” has the potential to be a continuous and near-real-time process.

The Lord can also speak to a person through things that other people say to you.  He can speak through what appears to be an impossible coincidence whereby the timing of an event can be a major clue that it’s a communication from the Throne Room.  Since the scripture says “resist the devil and he will flee from you”, it’s reasonable to estimate that you should be hearing from God all the times IF you are “practicing righteousness” (ref. 1 John 3:7) and have your God antenna tuned in (e.g. you are paying attention expecting to hear Him speak).  This is what I would refer to as the “sanctified intuition”. For example, if you have been seeking God (e.g. praying reverently and repeatedly for an answer to a question), you may find yourself standing in the kitchen thinking about what to make for dinner and suddenly receive an answer to the question; “out of nowhere”.

The Lord will also speak to us visually.  You may be wondering about something while driving down the road when suddenly your eyes lock onto a billboard with the perfect answer.  That’s God.  Allow me to give you an example of this dynamic.

I was sitting in a local restaurant having breakfast with an old friend.  While he was talking to me a thought of past sin suddenly entered my mind.  This is an example of what the Bible refers to as a fiery dart.

14 Stand therefore, having girded your waist with truth, having put on the breastplate of righteousness, 15 and having shod your feet with the preparation of the gospel of peace; 16 above all, taking the shield of faith with which you will be able to quench all the fiery darts of the wicked one.

I was frustrated that this thought entered my mind; and I asked the Lord (quietly in my heart) why is this happening?   As I looked above my friend’s ball cap, I see a sign on the building across the parking lot.  However the only word visible through the horizontal blinds was “buffet”.  What really made this event supernatural was earlier that morning I had been reading the Bible and actually read the story about Paul and the “thorn in the flesh”.

Here below is a picture I took of that very moment.  Notice how the horizontal blinds perfectly align such that I am centered on the key word the Lord wants me to hear.  The brick building in the picture houses a 96 item Chinese buffet, however the meaning of the word God was conveying was totally different and a direct quote from the scripture. 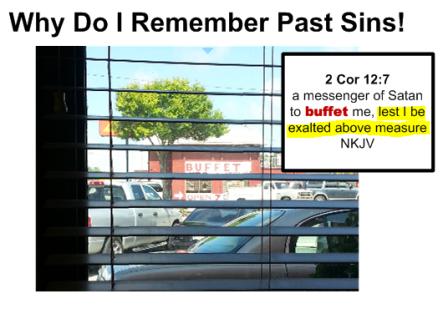 I was awed by this event.  Times like this make me fall in love even more with God.  He was confirming for me that Satan’s demons were shooting fiery darts into my head.  This is why it is critical we hold every thought captive to the obedience of Jesus Christ.

For the weapons of our warfare are not carnal but mighty in God for pulling down strongholds, 5 casting down arguments and every high thing that exalts itself against the knowledge of God, bringing every thought into captivity to the obedience of Christ, 6 and being ready to punish all disobedience when your obedience is fulfilled.

The Lord also speaks to us through the casting of lots as well.  You can search in your electronic Bible (providing you have one) for “casting* + lot*” and it’s all over the place.  Here below is one such example where the apostles used the casting of lots to determine who should replace Judas as one of the twelve.

And they proposed two: Joseph called Barsabas, who was surnamed Justus, and Matthias. 24 And they prayed and said, “You, O Lord, who know the hearts of all, show which of these two You have chosen 25 to take part in this ministry and apostleship from which Judas by transgression fell, that he might go to his own place.” 26 And they cast their lots, and the lot fell on Matthias. And he was numbered with the eleven apostles.

While the Bible is not clear what method they used, the twenty first century method is typically done by the opening of a book, such as the Bible.  For seeking a specific answer it may be useful to use a book such as a Thesaurus.  I’ve had amazing results using a Thesaurus and, in more than one case, have burst into tears as a result.

17 thoughts on “How to Hear God’s Voice”