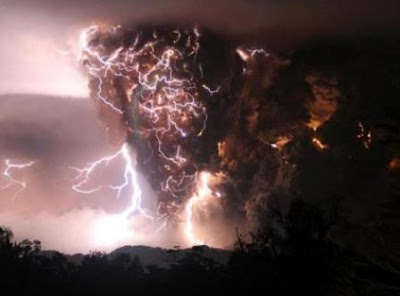 Kudos to my sister!  She came through BIG TIME on this one.  As I have said many times before, without every one’s contribution to the works of the “body” we are not nearly as strong as we should be.  Here below you see an excerpt from an Elijah List contributor.  It seems Mr. Davis has come forth with a prophecy / vision that he had some time ago that is extremely pertinent to this oil catastrophe.  Praise JESUS he is now speaking up about it on the Elijah List.

At the bottom I added a link so you may go read his entire article which has a LOT of scripture associated with the “saints” being elevated to a new level of spiritual power as a result of this “Manhole from the Gates of HELL”.

However to save you some time, below I published the most targeted portion of his prophecy as it applies to this oil volcano event.  When you combine all the prophecies together, and toss in the fact that the U.S. Navy is “making a run for it” from the gulf, this adds up to a really nasty warning.

Please keep praying for me.  I’m still in harms way, remaining loyal to my wife who is not yet feeling led by the Lord to leave.  But also remember no matter where you are to STAND IN JESUS NAME!  Oh and one more thing – please rest assured I am at complete peace in the midst of all this.

God is in CONTROL

Prophetic Experience of a “Manhole”

Further below I will share a transcript of the full message as I preached it in 2008. However, there are two quick points I would like to highlight. In this experience I saw what appeared as a “manhole” being lifted from the bowels of the earth. In various times of sharing this message throughout the last three years I have used the expression “manhole” as the best description of the image I saw being opened over the “bowels of the earth” or the “bowels of Hell.” (I used both expressions in various accounts of sharing the experience.)

When I finally began to understand the implications of this experience with the oil spill, the Lord reminded me that this is a “man-made hole” that has opened the bowels of the earth to this deep reservoir of oil. The footage shown on news networks of the oil billowing up into the Gulf are almost identical to the images I saw as the manhole was lifted and clouds of evil began to pour out. In my experience the lid or manhole looked like this image featured here.

As a further confirmation, there was an article published in Petroleum World magazine entitled, “The Well from Hell.” In the article the author made this statement:

According to the New York Times, BP’s internal “documents show that in March, after several weeks of problems on the rig, BP was struggling with a loss of ‘well control.’ And as far back as 11 months ago, it was concerned about the well casing and the blowout preventer.” The problem is that this methane, located deep in the bowels of the earth, is under tremendous pressure…

This article utilized some of the exact language that I used while describing my experience. Furthermore, while in Connecticut in early June we were discussing the oil situation and one of our hosts commented that he had listened to me share my prophetic experience concerning the lid being lifted over the bowels of the earth. He reminded me that I saw spirits ascending that had the appearance of Hitler and other tyrants of the past. He pointed out that Hitler was born on April 20 and this event started on April 20. Just in recent days we have seen an escalation in anti-Israel sentiment that is demonically inspired.

This seemed to be a further affirmation of the application of the experience. The Bible predicted that during the last days darkness would cover the Earth and deep darkness the people; but also marked the exact time that God’s people would “arise and shine for our light has come” (see Isaiah 60:1-5.)

HERE IS THE BEGINNING OF THE ARTICLE:

Contend for a Greater Measure of Prophetic Understanding.

Obviously, the question most often asked in recent days concerns our prophetic perspective of the calamities associated with the oil spill. This is something that we are very personally and intimately involved in as it is occurring right outside our home. Clearly, I have spent countless hours praying over the subject both as a defense mechanism for our region and prophetic understanding of its implications.

In the process, I personally felt it was imperative to not take a hindsight position and prophesy after the fact with various impressions or opinions. That

posture has a place of value to spearhead intercession and mobilization of resources; even so, I have felt a greater need for a more sure word of prophecy that bears the insignia of Heaven and provides valid direction and insight to mobilize God’s people.

The Biblical pattern has always been that prophets foretold key events with direction and insight attached to it. When the event occurred as prophesied, a greater measure of faith could be attached to the message associated with it. Exodus 4 outlines the model for ministry in the life of Moses; spiritual signs were given with a voice or message. It is the message that is of paramount importance.

According to Amos 3:7, the Lord will do nothing unless He first reveals His secret counsel to the servants the prophets. Furthermore, Jeremiah articulated God’s perspective in Jeremiah 28:9 saying:

“The prophet who prophesies of peace, when the word of the prophet comes to pass, then that prophet will be known as one whom the LORD has truly sent.”

AND MOST OF ALL
BE BLESSED IN JESUS NAME

0 2381
The Greatest Deception is the Genetic Abomination

4 thoughts on “The Bowels of Hell”