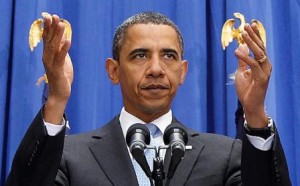 Wag the Dog!
Was it Last Week or Today?

By now most everyone knows that a major global “Wag the Dog” event occurred tonight.  An unbelievable lie was told to the entire world claiming that Osama Bin Laden was killed in a U.S. operation.

For more than 45 minutes the “talking head” pundits discussed how over a WEEK ago, Bin Laden was killed and supposedly they were waiting for DNA evidence to prove it was his body.  In fact, the news alert ticker at the bottom of the television reflected this exact same message as Obama was speaking.

At 11:38 Eastern Time, Obama said the following to the world …

” Finally last week, I had determined we had enough intelligence to take action.  I authorized an operation to get Osama Bin Laden, and bring him into justice. TODAY, at my direction, the United States launched a targetted operation against that compound, in Badaba (?), Pakistan.  A small team of Americans carried out that operation with extraordinary courage and capability.  No Americans were harmed.  They took care to avoid civilian casualties.  After a fire fight, they killed Osama Bin Laden.”

Not only was this event a complete “setup” but it was once again a remarkably BAD one.

Many of us believe this is a precursor to “front loading” people for the next major false flag attack which is be pawned off as a type of “retaliatory” event.

Word is coming in from all over the United States that military bases are being placed on “High Alert”  Confirmations have come in from local news sources in San Antonio and other places.

Here below is a press release from North Carolina 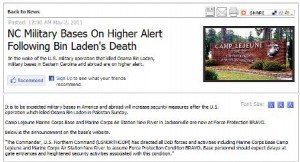 Nuclear Hell to be Released? 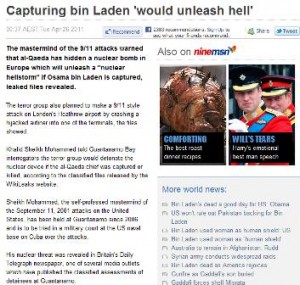 The following article was released on April 26th, 2011.  However these threats happened quite some time ago.  Why the “re-release” so close to the faked Bin-Laden event?  It seems as if we are being warned of imminent retaliatory attacks.  But since al-Qaeda doesn’t really exist and is a CIA creation, who then is releasing these threats?  Interesting that the AP News Wire and Reuters are both financially “owned” and controlled by the Rothschild Banking conglomerate.

Here is a “snippet” from the above article.

The mastermind of the 9/11 attacks warned that al-Qaeda has hidden a nuclear bomb in Europe which will unleash a “nuclear hellstorm” if Osama bin Laden is captured, leaked files revealed.

The terror group also planned to make a 9/11 style attack on London’s Heathrow airport by crashing a hijacked airliner into one of the terminals, the files showed.

Khalid Sheikh Mohammed told Guantanamo Bay interrogators the terror group would detonate the nuclear device if the al-Qaeda chief was captured or killed, according to the classified files released by the WikiLeaks website.

Sheikh Mohammed, the self-professed mastermind of the September 11, 2001 attacks on the United States, has been held at Guantanamo since 2006 and is to be tried in a military court at the US naval base on Cuba over the attacks.

His nuclear threat was revealed in Britain’s Daily Telegraph newspaper, one of several media outlets which have published the classified assessments of detainees at Guantanamo.

Here is a link to the entire article:

The information supporting this deception is so thorough and detailed it is very difficult to capture it all in one place.  I cannot more highly recommend you get yourself a copy of “The Obama Deception” documentary done by Alex Jones.

Here is a link to what claims to be the full online version:

Yes I realize that some people think Jones is “in on it” but we need to review all the “data” and do our own research.  This documentary is pregnant with amazing details of the situation we are dealing with.

You can also do a search on Tribulation-Now using the words “nuke” or “nuclear”.  It will take you to a number of articles written in the past that have a good amount of pertinent data to an eventual, arguably imminent “nuclear” false flag.  This data all “trickles up” to what many Christian prophecies and other information indicates will likely soon happen.

And in Jesus Name please do not forget about the Jonathan Kleck $10 Bill prophecy which shows an off-shore nuclear detonation and resulting tidal wave printed on the U.S. $10 bill.

I leave you with this photograph.   Watch and Pray.

May God Bless You All Mightily