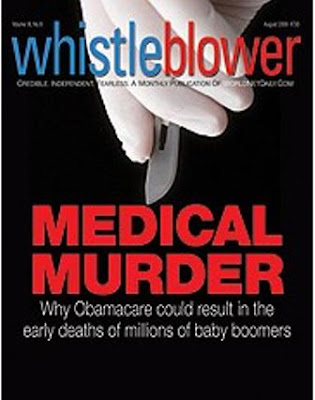 TRIBULATION-NOW is only providing this information to further establish the size of problem.

This is a direct link to the Whistleblower Magazine offered by World Net Daily. 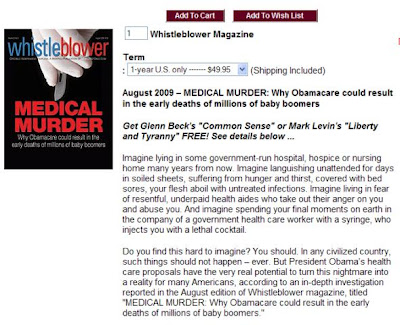 August 2009 – MEDICAL MURDER: Why Obamacare could result in the early deaths of millions of baby boomers

Imagine lying in some government-run hospital, hospice or nursing home many years from now. Imagine languishing unattended for days in soiled sheets, suffering from hunger and thirst, covered with bed sores, your flesh aboil with untreated infections. Imagine living in fear of resentful, underpaid health aides who take out their anger on you and abuse you. And imagine spending your final moments on earth in the company of a government health care worker with a syringe, who injects you with a lethal cocktail.

Do you find this hard to imagine? You should. In any civilized country, such things should not happen – ever. But President Obama’s health care proposals have the very real potential to turn this nightmare into a reality for many Americans, according to an in-depth investigation reported in the August edition of Whistleblower magazine, titled “MEDICAL MURDER: Why Obamacare could result in the early deaths of millions of baby boomers.”

Especially vulnerable are the 80 million baby boomers born between 1946 and 1964. “If you belong to that group, take note,” says Richard Poe, author of the August cover story. “Your generation has been targeted for a program of age-based medical rationing such as our country has never before experienced.”

Adds Whistleblower Editor David Kupelian, “If this dire end-of-life scenario sounds too awful to be possible, that is only because the reality of Obamacare has not been sufficiently reported. For this is not a fantasy – it is what is already occurring in other ‘civilized’ nations, including Canada and Britain, that have adopted the same government-run system.”

0 442
DAMNATION FROM THE SKIES