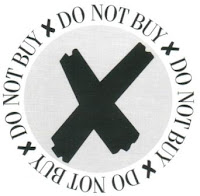 A LETTER TO THOSE WHO DARE TO BOYCOTT RESISTANCE TO THE WRECKING OF THE UNITED STATES!!

We shall BOYCOTT you BACK

As seen recently in the United States, the Obama Administration and his assignees have been “backing down”. They know they are out-numbered by the American citizens who are educated, make GOOD money, and a prepared to act against the current trend. We are sick of being robbed by criminals.

It appears that YOUR organization has decided to act “with” the criminal socialist element in our government by pulling support for Glenn Beck. Millions of email messages are rallying nationwide support. We shall respond appropriately to your flagrant disregard for this country’s constitution and its citizens well being.

We are not a coalition of ignorant, work-ethic-challenged government dependees, as is Obama’s primary constituency. We are the affluent upper middle class who BUYS YOUR PRODUCTS and does not shop at the dollar store.

I for one will no longer buy your products

Here is a list of the company’s you should avoid

Wounded Warrior – A charity (find another one that supports soldiers)

Joseph A. Bank – A (no longer so) Fine Clothier

Cinergy Health – A Health Insurance Co. obviously in bed with the Obama administration.

Wyndham Hotels & Resorts – Just another Hotel. Use Hotels.com and find another.

United States Postal Service – This one is easy.

A.A.R.P. – Retired People, they are working against you. Get rid of them.

U.H.C. – United Health Care (switch if you can but alas, not to Obamacare or “adios”)

WSJ – The Wall Street Journal (save some time, switch to the Internet)

Radio Shack – Go to Walmart instead. They have the same stuff and it’s cheaper

ADT – ADT Home Security sucks. They won’t even notice if your alarm is disconnected. Try it.

Equis – A Stock Trading Analysis company. If your trading stock now, see you in the bread line

Apple Computer – Too expensive for what you get. Save a thousand and get a PC!

Darden Foods – Avoid Longhorn, Bahama Breeze, Olive Garden, Red Lobster, The Capital Grill and Seasons 22. Eat at home. Get some candles. Save $50 dollars – you will need it.

PHS – Pacific Care, another Healthcare company in bed with the Obamacare group

1 thought on “Boycott YOUR PRODUCTS”