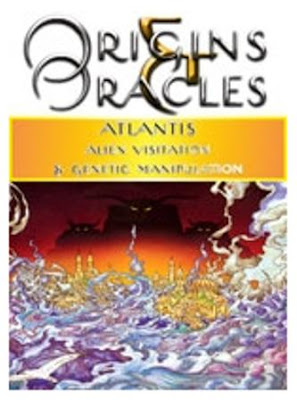 THE MISSING LINK TO “EVERYTHING”?

I have recently done a study of the works by Michael Tsarion. (www.originsandoracles.com) He has a documentary set (and book by the same name) entitled “Atlantis, Oracles, & Genetic Manipulation”. I just completed the documentary (5 DVD set, nearly 10 hours and not inexpensive). It is troubling and fantastic. It eerily answers so many dangling questions. He does a fantastic job backing his findings in the Bible. Much, if not most, of his Biblical references are huge eye openers and are from the accepted canons.

It is also MOST important to note there are 22 books of the Bible that are mentioned IN THE BIBLE, but are not part of the current CANON. We can thank our Luciferian Constantine Vatican friends for this censorship. This troubles me MOST. Some of these books are just as fantastic as what I am writing here.

More and more leading Christians of today are beginning to crack open these books. BENNY HIN is one of these Christians as he will mention Nephilim (“giants”) and happenings from the Book of Enoch on occasion (GOD BLESS HIM). Most Christians do not even hear what he is saying when he does this. Thomas Horn (author of “Nephilim Stargates”) is a scholar of these challenging Biblical studies and topics. He is also a Born Again Christian and used to be a pastor with the Full Gospel Business Men’s association (which is now linked to Illuminati control through otherwise questionable Rockefeller and Government “faith based” evil funding).

Fortunately Tsarion is an expert in Mythology. Unfortunately he believes the Bible is mythology. However he also believes that you must take the word “myth” out of it and look at it as “historical” writings. Once you do that he believes it unfolds the mysteries of old and throughout today. So as long as you understand *his* position then you can be strong in your faith and not let it mess up your world. Personally I have strong faith in Christ so I believe that MUCH mythology (written “AFTER” Christ’s time on Earth) is intentional forgery known as Gnosticism; intended to confuse. This Gnosticism is what led to the censorship of the Bible in the first place. Tsarion also attempts to give credence to Theosophy to some degree (which I find is okay), but must be strongly filtered.

The flaw in Michael Tsarion’s belief system is this. His conclusion is similar to many like him such as David Icke. They start out their study without any faith at all in Christ. Because of this, they come to the conclusion that it is all “MYTH”-ology. They ultimately believe that the HUMAN being itself must be strong and discover his own self through inner peace and “LOVE”. They believe there is no “reachable” God per se (same as Kabala and Gnosticism). There is never a mention of prayer at all because they do not believe in it. But this is a huge flaw in my opinion and here is why.

Tsarion / Icke acknowledge with great fervor the practices of the Luciferian evil ones. They paint a historical portrait of the bloody past replete with child sacrifice, blood drinking, and praise and worship to Satan, SET or Ba’al. Tsarion / Icke seem to lack any familiarity with tangible evidence of Satanic evil and spiritual manifestations of today. They never touch upon “demonic possession” of the human. They never mention anything but the practice of evil. This keeps them from having to deal with the GOOD side of the Good vs. Evil equation. Any Christian that has seen FIRST HAND a human writhing on the ground, speaking in a deep guttural, unintelligible demonic voice get DELIVERED with the power of the Holy Spirit has NO DOUBT of the existence of Jesus and Satan – the Spirit World. Any person who has dabbled in the occult and moved chairs across the room or WORSE, – KNOWS! They know. And many of them go RUNNING to the good side (as my own Mother did after moving a chair). They run away from the Evil directly to Jesus. To them, it was TANGIBLE.

Why would you study history for 20-40 years and draw the conclusion that millions of seemingly unstoppable evil possessed “beings” have been ruling the world and are preparing to take it over and present no GOOD SIDE to that finding? If there is a SPIRITUAL “EVIL”, then I conclude there is a SPIRITUAL GOOD. If *they* pray and perform rituals and sacrifices to THEIR GOD Lucifer, then we MUST PRAY to our spiritual God EL ELYON and his spirit son Jesus Christ. Both David Icke and Michael Tsarion are missing the most important LINK. That is the LINK TO THE SPIRITUAL WORLD

CONCLUSIONS DRAWN FROM THIS STUDY

Here are some of Michael Tsarion’s conclusions (or speculative beliefs) derived from the Mythological study.

1. A great race of astonishingly powerful and technologically advanced beings came to Earth thousands of years before ABRAHAM’S Biblical History begins. This happened “just prior” to EDEN. (yes Zecharia Sitchin’s studies are mixed into this)
2. These beings were “NOT HUMAN” genetically, but appeared humanoid
3. These beings manipulated genetics of humans to create a working breed to do their work for them – These are the Nephilim mentioned in Genesis 6:1-5
4. These beings created and lived in ATLANTIS
5. These beings made 3 (THREE) attempts at genetic manipulation to create their worker race
6. The first attempt was a mix of Neanderthal and THEM which created an amazingly smart breed, too smart and it fought back and moved on
7. The second attempt was not quite as powerful and enlightened and created the basic human which was corrupted / influenced by the first breed and moved onward (an explanation of Eve’s influence on Adam) out of Eden
8. Then came the POLAR SHIFT.  He believes there was no flood but the Polar Shift created the flood. Personally I believe there was both.
9. The devastation of the Polar Shift wiped out ATLANTIS.  The floods wiped out all the visiting alien race’s “technology”
10. But the devastation did NOT wipe THEM out.  They are still stuck here on Earth, living underground. (there is evidence of this see Phil Schneider)
11. They then created one more genetic race to do their work.  They discovered by genetically manipulating “reptiles” they got what they wanted.  This resulted in the creation of the REPTILIANS.  He believes the Reptilians are the blood line that has been the blood thirsty ruling class throughout all of ancient history. Egypt, Sumerian, Babylonian, etc.  He believes the Reptilians work for “THEM” who dwell underground
12. He believes the Dynasties of Ancient Phoenicia, Venetia, throughout Europe are all bloodlines of the Reptilians
13. He believes they are controlling the banking system and world governments through this bloodline
14. He believes THEY have an agenda, and that is to GET OFF THE EARTH because they are *stuck here*. Because of their technological losses, they have not been able to rebuild yet.
15. He believes they are behind technologies such as Nuclear Power, HAARP, and the CERN Accelerator. (The British Royals funded CERN by the way and Oppenheimer is quoted as admitting they had help from outside the world)
16. He believes these technologies have one MAJOR purpose; to break open a STAR GATE so they can get the hell out of here.

This belief system, through mythology, answers zillions of questions such as:

I agree an amazing number of his conclusions / beliefs have merit. However Jesus Christ is the missing link. Here’s why. In all of this there is no Supreme God. There is no Universal Creator. An Almighty. The Bible is clear of the existence of a God Head (lots of Gods and workers called Angels). It is clear on El Elyon being the Almighty God. It is clear that Yeshua Hamashia (Jesus) is the spirit son of EL. Yeshua’s mission is to SAVE US. NOW WE KNOW WHAT HE IS SAVING US FROM!!

None of Michael Tsarion’s or David Icke’s findings are SPIRITUAL IN NATURE. This is a MAJOR GAP!!

Everything is SPIRITUAL. The God Head is made up of Spirit Gods. El Elyon is the Almighty Most Powerful.

If these beings exist, and if they messed with human genetics, then they TOO have a SPIRIT GOD which is ALSO EL ELYON.

This is the missing link in their teaching.

This is my summary of their conclusions mixed with my absolute knowing of the existence of EL Elyon and his spirit son Yeshua.

Remember this. Michael Tsarion’s *alien creatures* with ALL their astonishing power, cannot escape from the EARTH

GIVE ME A FREAKING BREAK

MY LORD GOD EL ELYON can go where he pleases. His legions of spirit soldiers can move through the SPIRITUAL ETHER upon his command at will.

So in conclusion, if these alien beings do indeed exist, they are NOT GODS AT ALL. They are IMPOSTER (g)ods. They are manifestations of EVIL. They are Satanic in nature and deed, but are not DEMONS. Even DEMONS can escape from their captive human and move into the Spiritual Ether.

May Jesus and the Power of the Holy Spirit give peace and discernment to those seeking a higher understanding. May the Lord God El Elyon, protect us with his Armor. May we seek him with a fervor never seen before in the world. May we NOT be marched into their ovens, and instead as you promised, rise victoriously over evil. May any Christians reading this advanced information not be “tripped up” but have their minds open to a deeper understanding of God’s Word and prepare us for the Tribulation we have yet to endure. Praise YOU JESUS!!

3 thoughts on “ORIGINS AND ORACLES: The Missing Link to Everything”