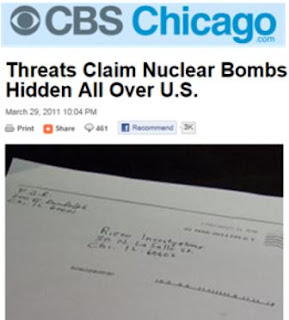 Well glory be to Jesus Hallelujah!

For the last couple days things have been … well … relatively stable.  That is if you can get past all the Middle East turmoil and radiological sensor alarms going off across the USofA.  Today I saw a report that the radiation is triggering sensors even in Israel.  Hmmm.  Let’s all be praying that those reactor cores DO NOT reach the underlying “water table” because that would be very bad indeed.  While it is unlikely, it is not impossible.

And if that news wasn’t enough to raise your “apocalyptic eye brows”, then this report might do the trick unfortunately.

It’s important for the reader to understand a little history associated with this rather troublesome report.  First it’s appropriate to point out that not too long ago Obama made an official announcement that a Nuclear Terror threat was a grave danger to the U.S. and the risk was increasing.

Moreover it’s also important to understand that back in 2009, John Bolton made a “wise crack” about “nuking Chicago” around about the same time an “Emergency Management” employee reported very upsetting news about FEMA requesting data on building structures for “high winds”, land availability for “mass graves” while using a scenario of 400,000 refugees coming in from Chicago.

AND in addition to this bizarre set of happenings, David Wilkerson had a vision of fire rolling down the streets of New York City.  All this news came in around the same time frame.  Most troubling.

And then it was …. well …. simply forgotten.

Here is a link to the article:

Here is a link to the David Wilkerson Vision:
http://www.brutallyhonest.org/brutally_honest/2009/03/famed-pastor-predicts-imminent-catastrophe.html

And here is the audio / video of the Emergency Management person calling a radio show concerned about the FEMA line of questioning.  This is alarming.  You really should listen to this.

Behind the Scenes “Coincidental” Discussions

Just today I received a number of phone calls and emails that included some concerns raised regarding this exact threat.  As regular readers of Tribulation-Now know, it has been a long time belief of mine that, when the time comes, “they” will throw the “whole kitchen sink” at us.  I pointed this out in some older articles linked to in this recent one entitled …

And indeed I reiterated this very concern on the phone with two of Tribulation-Now’s thought leaders just recently.

Never mind there have been allegations that suggest nuclear devices may have been used to “help along” the Japanese earthquake.  Never mind all the dated reports from “way back” of “Russian spies” having admitted planting nuclear devices at various strategic locations across the United States.

Well as I was wrapping up my official 3rd day at work, an email came in from someone new.  As best as I can tell from the email address, the name is “Jean”.  God Bless You Mightily Jean!!!  The only thing in the subject line was “false flag?”.

Here is a snippet from the Chicago New affiliates’ report.

CHICAGO (CBS 2) – The threats came in the mail and to date, there have been 25 letters that warn of nuclear bombs destroying America.

People who got them called the FBI and CBS 2′s Kristyn Hartman learned, the Bureau’s Chicago office is leading the investigation.

FBI Special Agent Andre Zavala said, “Yes, they alarmed a lot of people.”
Attorney Tracy Rizzo was alarmed. A number of days ago, an envelope, with a Chicago postmark and a hand-written address to her private investigations firm, came in the mail.

The letter inside said, “The Al-Qaeda organization has planted 160 nuclear bombs throughout the U.S. in schools, stadiums, churches, stores, financial institutions and government buildings.” It also said, “This is a suicide mission for us.

The writer, who claims to be Osama Bin Laden, tells the reader the nukes are remotely controlled. “It was clear the writer wanted to scare me,” said Rizzo, “Yes, it frightened me.” Rizzo was one of eight people in the Chicago area to contact the FBI.

Agencies in Oregon, California, Texas and Florida also got the letter with the Chicago postmark.
“There are items in the letter that lead us to believe it is a hoax,” said Zavala. “There are several demands documented that aren’t fully coherent.”

“The FBI investigates every element. We can’t take that chance,” said Zavala.
So, why the threats?

The writer alluded to how families in Afghanistan have to live. The FBI said it will find that writer, and when it does, he could face 5 to 10 years in prison for each letter mailed. Anyone who’s received a similar letter should call the FBI.

Here is a link to the entire report:

Newsradio 780’s Dave Marsette report on this event as well.

Alas I simply cannot close this article on such a gruesome report alone.  Praise Yahushua Jesus our awesome King of Kings and Lord of Lords, Dorien from Australia sent in this wonderful David Wilkerson “letter” to me.  Talk about EXCELLENT timing.

THE COMING OF JESUS

I believe Jesus is coming very soon.   We see the Lord gathering the nations together against Israel.  Events are moving rapidly toward Armageddon.  “When you see all these things, know that it is near, even at the doors”(Matthew 24:33).  “Of the day and hour knoweth no man, no, not even the angels of heaven, but my Father only” (v. 36).  All signs point to a Mideast war against Israel.  Out of the turmoil in Arab nations will come a united call to destroy Israel. We are beholding the fulfillment of prophecies we have preached about for many hears.  Those who know the Scriptures have a Holy Ghost inner sense of the Lord’s return.  We hear the call of the Holy Spirit dwelling in us, crying,  “Even so,Lord Jesus, come.” Jesus said,“Watch therefore: for you know no what hour your Lord will come” (v. 42).  “Be ready, for in such an hour as you think not the Son of man cometh” (v.44). “Blessed is that servant, whom his Lord, when he comes, shall find sodoing” (v. 46).Beloved, do you feel—do you sense—that these are the last of the last days?  Do you share the longing for his appearance?

Look up; our redemption is drawing near!

For you brethren are NOT in darkness that this day should overtake you as a thief!

BRING IT ON IN JESUS NAME
THE KING IS COMING
PLANET X CAN KISS MY GRITS
GLORY BE TO THE KING OF KINGS
YAHUSHUA
JESUS the MESSIAH
is
THE ONLY
WAY
TO SALVATION!