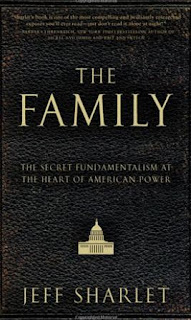 Time has not permitted me to publish a detailed article on “The Family” on Tribulation Now, but I saw this article surface and figured I would send this out to you all.
This article refers to “The Family” as a “Crypto-Fascist Evangelical Group” of FAKE Christians.
What I can tell you about “The Family” is that the membership is all highly influential government and CFR members posing as a Christian group that share residence near downtown D.C. in a commune like building. It is a Satanic Secret Society, not unlike the Freemasons or the Knights Malta, that is masquerading overtly as a evangelical Christian group.
YOU CAN BET YOUR SWEET ASS THAT WHEN SOME REALLY BAD NEWS IS RELEASED THESE GUYS WILL BE ON THE FRONT PAGE GIVING CHRISTIANITY AN INTENTIONAL BLACK EYE
I fear to suggest that should the government sponsored 9-11 attacks actually become front page news and the REALTRUTH be told, this organization will take the FALL as a PATSY GROUP impeaching all evangelical Christians along with them as Warmongers, Enemies of the State of Obama, and Islam-Haters.
Anyone that calls themselves a Christian should fear the day this happens, if it does, Heaven forbid.

Muhammad Atta, the alleged ringleader of the 9/11 hijackings, told witnesses the crypto-fascist evangelical group known as the Family donated at least $200,000 to the cause of flying jets into the Twin Towers.

The information surfaced during the abortive FBI investigation right after the events of 9/11 and were duly ignored by federal investigators, but not by the local press in the retirement community of Venice, Florida.

Investigative reporter Daniel Hopsicker has been investigating ties between 9/11 and the local Venice airstrip since the Twin Towers collapsed and has uncovered that the facility was used for decades by the CIA and other clandestine organizations to run drugs and arms, drop assets into the Caribbean—and to train at least 3 of the alleged 9/11 hijackers how to fly.

Hopsicker tracked down witnesses to an argument between Atta and Marwan Al-Shehhi less than six weeks before September 11 over finances at the Pelican Alley Restaurant in Venice, Florida.

Renee Adorna and her husband Tom own the restaurant, and she recalled that Atta yelled at Marwan: “We’re talking $200,000! We’ve got to answer to the Family!” Further, she said: “And I could have sworn that the one guy was wearing a cross, you know, the big gaudy gold cross on the chest. But I’m not sure now. But I know he had a big watch on.”

According to the account, there was a third, unidentified Egyptian-looking man in their party as well.

The Family is a quasi-fascist evangelical cult with tentacles around the world. Some of its members include Americans from the highest echelons of government, including former attorney general Ed Meese, who resigned amidst controversy during the Reagan over arms and cocaine shipments to Iran and Nicaragua, and also personally profited from the government’s theft of PROMIS software developed by the INSLAW group. The Family was the subject of the book “The Family – The Secret Fundamentalism at the Heart of American Power” by Jeff Sharlet, a recent guest on the Alex Jones Show on July 28th, 2009. It is also the subject of earlier research by Wayne Madsen, another frequent guest on the show.

All of the leads developed by Hopsicker, including agents now involved in the recent drugs, arms and embezzlement scandals in the Turks and Caicos islands , not to mention an assassination attempt on George W. Bush on the morning of 9/11 in Florida by alleged Arabs posing as journalists in a white van, have been ignored by all federal investigators.

Just as in the Kennedy assassination, the best source of information on what really happened remains eye-witness reports collected by independent journalists. Not coincidentally, the 9/11 conspiracy shares a number of features with the Kennedy murder, including multiple Attas/Oswalds, suppression and destruction of evidence, and a packed investigating panel led by conspirators able to push prefabricated conclusions on other members, who in turn push the lie on the press and the public.

The biggest parallel with the Kennedy assassination and 9/11 was the fact that they were so explicit—they happened in plain sight. The public was asked to ignore their own common sense in both cases. On 9/11 we were supposed to believe that the perfect demolition-style fall of the Twin Towers was due to jet fuel fires corroding steel, although it was obvious while it happened that they were brought down by internal explosives.

And that answers the nagging question about the Atta and Marwan incident in Venice, Florida in August of 2001: why would two native Arabic-speakers (Atta was supposedly from Egypt and Marwan the United Arab Emirates) have a loud argument in a very public place in English?

The answer is they staged the argument. Was the Family even involved with the sum in question? Who knows. It fits in with them leaving significant details of the plot in plain sight, to taunt the public.

Perhaps unsurprisingly, Hopsicker’s latest article, written with Texan lawyer and researcher Linda Minor ( Big Safari, the Kennedy Assassination and the War for Control of the Venice Airport), finds deep connections between the Venice airport, the Kennedy assassination, Iran/Contra and the Clinton/Bush cocaine smuggling operation through Mena, Arkansas, as well as the 9/11 patsies at flight schools around Florida.