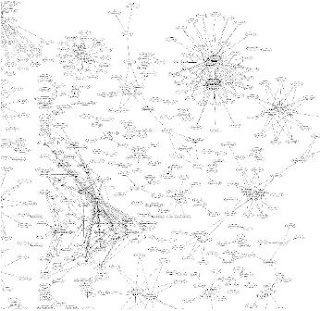 Lines Upon Lines
Pyramids Upon Pyramids

Jesus is so wonderful.

JESUS IS THE KING.  And we are about to meet him really soon.  You can BET on it!

We are so blessed to be alive during these very interesting times.  I hope and pray with all my heart that everyone had a good Thanksgiving holiday.

Where oh where have I been?  I have to tell you I have been right here.  Buried under books.  I have 13 books stacked up on my desk here in the office.  Two of them are open.  Several more are open behind me.  Frankly it is very hard to stay focused on any one particular topic.  And what makes it even more challenging is that all these subjects are “linked together” in one way or the other.  The temptation to jump from one book to another is very hard to keep in check.  Toss in a few open Internet browsers and I am drowning in data.

Then it hits me.

Writer’s Block and The Shoulder Tap

So the other day I’m doing the “day job” thing again.   This time of the year is hard.  Companies like to cram all their project work into the last part of the year.  And to make matters worse, there is something magical about December 31st for “deadlines”.   It makes sense, right?  After all, why wouldn’t you want to set all your deadlines at the end of the year when everyone is on vacation and there’s no one left in the office to get the tasks completed?  (shaking my head)

Sometimes when you are suffering from information overload you can’t see the forest for the trees.  And to make matters worse, you have those “life challenges” that get in the way all the time.  We all have them.  They’re unavoidable.  Work deadlines, approaching Thanksgiving Day feasts, relatives flying in, sleeping arrangements, and then to top it all off … yes you’ve guessed it … I am the one who does all the cooking.  I actually love doing it.  But when you toss all that wonderful stuff on top of this Tribulation-Now blessing, it is totally overwhelming.

It’s really very challenging to “shift gears” back and forth between both realities.  After all, the “end of the world stuff” just doesn’t seem real when you are mixing pumpkin pie batter and basting turkeys.  It’s almost like living in the midst of alternate realities of sorts.  One second I’m cracking an egg on the side of a mixing bowl and the next second I am receiving an alert on my cell phone that a 4.5 magnitude earthquake cluster is hammering the Arkansas area.  I expect it will get really hard to bake Christmas cookies when Nephilim are running through your back yard trying to eat your dogs.

So there I am a few days prior to the Thanksgiving Day holiday period.  The previous weekend I had decided to watch the original “Aliens” movie with Sigourney Weaver from 1986.  I rarely re-watch a movie. But for some reason I felt led to download it and watched it by myself wondering if I would spot some hidden information.  But I didn’t.  It was a good movie, but I didn’t see anything that was “Illuminati like”.

The next day I went to work as usual.  One of the guys on my team sent out an email to the group.  There was a picture in the email.  It was the Statue of Liberty with the exact same “Alien” from the movie stuck on Lady Liberty’s face.  I sat there in silence and stared at that picture.  I was searching my spirit for some type of “connection”.  I couldn’t believe what I was seeing.  It was impossible.  I hadn’t seen that movie in over 20 years.  Why was I seeing this picture?  And yes I know that the Statue of Liberty is actually Queen Semiramis.  That “coincidence” stuck with me and bugged me all day.

The next morning I woke up wondering still why I saw that alien picture.  The Lord spoke to my heart and told me it was His way of letting me know He was “still here”.  You see I was having a “dry spell” or a type of writer’s block.  Things were just not “coming to me” they way they used to and it was really bothering me.  Perhaps I was under demonic attack.  I assume nothing these days.  But there is no question that “alien” picture was a supernatural “tap on the shoulder”.  It was a gentle reminder that the Lord’s Angels still had “charge” over me.

For He shall give His angels charge over you,

To keep you in all your ways.

When you go through these surges in life where you feel very spiritually connected to the Lord, dry spells worry you.   I don’t know how the prophets of old dealt with it.  From all of my studies and my 30 + years of listening to Christian Bible teacher’s testimonies galore, the miraculous moments are few and far between.  This means there are long periods of time you have to just “act in faith”.

I have often been told by other “Christians” that you must “wait upon the Lord” before taking a step in faith.  I simply do not agree with this “sacred cow” doctrine.  Yes you must believe the Lord will open the doors for you to step through, but if you don’t take the step, sooner or later the opportunity is going to pass you by.  This doesn’t mean the Lord didn’t open the door.  And if you think God is going to suddenly start talking to you through your stereo system, telling you to “get the led out of your butt”, then you’ve lost it.  Hearing God’s voice and learning to follow His will takes some initiative and faith.  But it sure helps A LOT when you get the occasional “tap on the shoulder” from those “messengers” we count on so much.  I love God’s angels.  I can’t wait to actually have a conversation with one some day.

A day or so after the “alien / Statue of Liberty” event, I get a call from a friend to meet him at the mall for lunch.  Upon arrival he informs me another friend is arriving at the airport and will soon join us.  Pretty soon the three of us are reminiscing about “old times”.  All three of us used to work together at the same company about 10 years earlier.  We remembered one funny story after another.  And soon we were laughing about the “living … breathing … documents” incident.

You see, one day there was a big meeting with a lot of key people there.  The fellow leading the meeting had a strong Romanian accent.  And he was explaining that the documents being authored during the project were “living documents” that needed to be maintained constantly.  With his Romanian accent he rolled his tongue and said in the most Transylvania-“like” way … “Remember these are LIVVVVINNNG, BREEEAAATHING, DOCUMENTS!!”   Someone at the table said “No problem there Count Chocula!” and the whole room BURST into laughter.  Nobody ever forgot that funny moment.  There we were more than 10 years later remembering it as if it happened yesterday.

Suddenly my friend jumped up and yelled “GEORGE… COME OVER HERE!!”

There in a crowded mall, George suddenly showed up at our table.  George is the guy we were remembering from 10 years earlier.  George is the fellow with the Romanian accent.

To my friends, it was an unbelievable coincidence.

To me … it was supernatural.  A “tap” on the shoulder.  A bizarre reminder to “please stand by” … there is “more to come”.

After the “Count Chocula encounter” I was walking around in a “Praise Jesus” fog.  I didn’t know what was going to happen next.  Things like that just dont’ happen to me.  While I admit I have had quite a few supernatural confirmations via emails from various Tribulation-Now contributors and a hand full of super unbelievable phone call moments, the “alien – Statue” event when combined with the Count Chocula moment were super bizarre and certainly had the effect of “waking me up”.

But I remained somewhat troubled because I was not “connecting the dots”.  While both of those events were amazing, neither of them were leading me to my next article or pushing me toward any particular area of study.  I still had more than a half dozen books open on my bed side table.  Everything from “Pigs in the Parlor” to “The Key to Solomon’s Key”.   Everything from “The Christian Workers’ Handbook” to “The Canon Debate”.  Everything from “The Underground Alien Bio Lab at Dulce” to “Smith Wigglesworth on Healing”.  I depend on the Lord to “push” me toward the next subject when I get stuck and it just wasn’t happening.

I believe it was a Tuesday morning.  I was doing some research on computer security at the time.  This was just prior to the Thanksgiving Day holiday.  I opened an email from a computer security company.  Inside the email was a link to what they referred to as a 3-D Botnet Map.  The idea was that you could “zoom in” and “zoom out” and see into a map of a global Botnet.  For those that don’t know what a Botnet is … it is a collection of virus infected computers located all across the Internet.  A typical Botnet can be made up of millions of computers in hundreds of countries.

The picture at the top of this article is the 3-D Botnet Map showing thousands of computers all infected with this particular virus.

I then “zoomed in” with the zoom control to see what I could see.  I zoomed inside the collage of thousands of computer nodes.  When I zoomed in far enough to see the labels on the infected computer nodes, BY COINCIDENCE, the computer node in the very center of my zoomed view was … 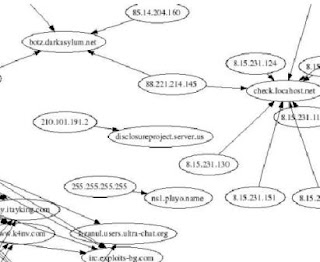 0 258
Wheat Famines & Terror from the Heavens

8 thoughts on “The Botnet Coincidence”