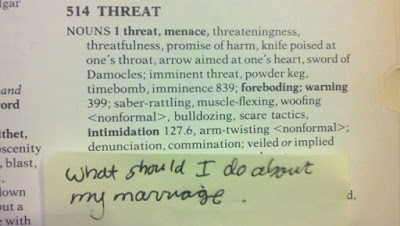 Many of you know that I have been going through marital challenges due to my intense desire to serve God more than anything in my entire life.  I love Jesus more than life itself.  And this is not an easy concept for most people to deal with.

But I knew I had a duty to love God and His Son Jesus more than anything.  1 Corinthians 7 makes marriage responsibilities very evident.  Amen.  We are not allowed to “tear out” scripture to suit our own agenda.  So I knew I had a responsibility to do what was right before my Heavenly Father.  No LYING to yourself or before God … NEVER EVER.  Period.  When you repent.. you better DAMN well mean it .. because your Father knows if you mean it or your giving Him “lip service”. Amen?

So I was backslidden when I got together with my wife.  That’s okay.  But when, by the divine providence of the Lord, we started to get into things that were “less than Holy”, in our practices, some terrible things happened.  It was utterly horrible.  Not a good testimony, unless you want to hear the “worst case scenario” of those who are in serious trouble with the demonic influences of the Kingdom. It was as bad as it could be.  It resulted in my total turn around and surrender to God on a level that I have never experienced in my life.  The entire testimony could fill a book.

After the utter horrible and unspeakable happened, and my intense prayer for the freedom from the clutches of the demonic were answered, I prayed in tears to God in the shower one morning and said, Father God, I am totally and 100% yours and do with me what you will.  I empty my cup unto  you and ask you to fill it with only your will.

I guess, not so surprisingly, soon thereafter my articles went global.  I remember sitting on the porch of a local bistro, having some Sumerian ale, when someone notified me that my articles were being published on Steve Quayle’s web site.  I remember freaking out and realizing things were changing in a big way.  I cried.

I was soon thereafter led to publish articles that helped people understand how to fight back against demons and understand that WE are Sons of God and are commissioned, through Praise and empowerment through the Holy Spirit, that we are not to sit back and take the beatings we are taking.  Praise Jesus for the POWER that He has given us to Stand Up for Ourselves.

And while I continued to write articles of fear due to the Deep Water Horizon scare that was being spread, I finally surrendered to Jesus and realized we are  not to worship this earthly existence and truly embrace our freedom through our King Jesus and what we REALLY DO have in store for us in the Universes of our King Jesus Yeshua Messiah.

Tribulaton-Now’s readership grew to become supernaturally led by the Lord.  People were seeking Jesus and they were finding him.  I promised myself that every email would be answered.  Every Son of God in the Kingdom of Christ would be answered .. no matter what it took. I spent endless hours serving my King making sure that I responded personally to every prayer.  And so I did. And it has been the most amazing, tear filled, blessing in my entire life of 48 years.

I remember noticing that my wife was becoming distant and resentful.  I came to her in tears in the morning as she was getting ready for work telling her, HOW CAN I TURN MY BACK ON GOD’S PEOPLE?   And I got a look of resentment.  She did not understand how I could want the Kingdom so much even to the reduction of her personal attention.  I cried to her and said, “How could you turn away from these people”?

I know the scripture and that God hates divorce.  I could not defy God.  I continued to seek God, always saying “Your will be done”.  Amen.  I know 1 Corinthians 7 and understand my responsibilities to my wife and hers to me.  And I continued to pray.  But nothing seemed to change.  We had some lively exchanges about her responsibility to support me as a Shepherd unto the Lord, but she made it clear that the way she saw God was not the same way as I saw God.  She was raised from a Catholic background, and didn’t truly understand the utter commitment required by the Kingdom.

About 3 months or so ago, while praying to the Lord, I asked God about my marriage.  And the picture you see at the top of this article is what God showed me.  I opened a Thesaurus of 800+ pages, in His name, and casted the “lots” and to my utter astonishment, he said “Threat .. a menace, an arrow aimed at one’s heart”…  I could not believe what I saw.  But it indeed did happen.

This morning my daughter Kristin, came into my office in tears.  She did not want to see her Father’s heart broken.  She said she heard my wife on the phone with her “new lover” last night.  Indeed a friend she met via the computer and her love of computer games.  Evidently she had also joined a singles group in Tampa as  “separated but married”.  Of course, in my Godly trusted belief in marriage, I did not consider that as likely.  I was wrong.  And Praise Jesus because He warned me in the Thesaurus lot throw in the picture above.

My daughter let me know that she planned on leaving me even before Christmas. She let me buy her hundreds of dollars worth of presents and withheld her plans.  Okay.  In fact, I even told her that she could withhold her contribution to the household costs to help her afford her Christmas wishes, as an additional gift to her out of personal compassion to her desires.

After this morning’s disclosures from my daughter, of her 2 hour plus conversation with her new lover, I realized that God’s warning to me was a reality. I had no idea the extent of the issue, but that’s okay.  In complete peace, I confronted her and told her tonight that her and her lover need to go and be on their way in Jesus name.  She angrily confronted my daughter for telling me what she did.

I took my daughter and her newly dedicated Jesus filled husband out for dinner. They disclosed more informaton of the master plan to “leave me” which was fine.  I felt nothing less than the divine intervention from God in all of this.  I didn’t have to hear all the gruesome details  What was truly important, was that God’s hand was involved in all of this and my newly found freedom to serve the Kingdom was sanctioned by my MIGHTY KING.

When we returned from the restaurant, her and her new lover, were filling their SUV with as much as it could carry.  I told them to “Be Blessed in Jesus Name” and told my wife not to worry that I would help her as much as I could and she would be able to retrieve all her “stuff” as it was needed.

AND SO THE STORY FOR THE KINGDOM GOES