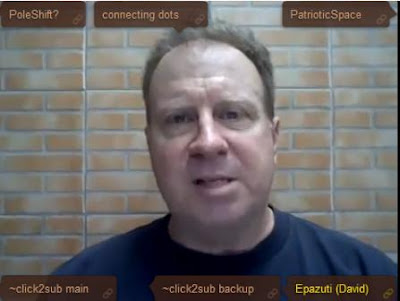 FEAR NOT
In Jesus Name Have Oil in Your Lamps!

The reports are flowing in heavily regarding some type of alleged “cover up” regarding some leaked information from a claimed “government source” that there is a forthcoming “Pole Shift” expected to occur sometime around “March 15th” of this year.

The reports indicate that the information is being aggressively “terminated” as soon as it is released.  Many of us know that recently God Like Productions www.godlikeproductions.com was taken down for a number of days.  It is not known if they were “terminated” due to this information leaking out on their web site, but some claim this could be the case.

Tidbits of Truth Amongst the Disinformation

In addition, while heavily infiltrated by “disinformation agents” the Above Top Secret (ATS) web site has had a number of similar reports surface was well.  ATS data that is leaked is immediately “attacked” by the disinformation agents and “debunked” as nonsense.

While there is definitely some nonsense that is published there, there is also a lot of truth that is “put out”.  So it’s any one’s guess if the claims are true or not.

It is no secret to the readers of Tribulation-Now that this “Planet X” Jeremiah “Destroyer” phenomenon is the real deal and that Isaiah 24s “Judgment upon the Earth” is already in “full play”.  We are aware that the global seismic sensors are going “crazy” right now as the earth shakes like never before in history.

If you are new to Tribulation-Now, on the right side margin scroll down and look for the BLOG ARCHIVE and click on the triangular “twisties” to drop down the article titles and look for those with “Planet X” and “New Madrid” in the title.  You SHOULD also use the article “Search” field just above the picture of the “Evil Onion” near the bottom entitled “SEARCH THIS BLOG” for tons of other related information on “wormwood”, “planet x”, “nibiru”, and similar terms.

Reportedly last Friday the 11th, a female caller to the Alex Jones show was “cut off”.  She said she was a government official that had critical information that needed to be known by the public.  The reports indicate she used voice altering technologies to protect her identity.

She reported that the government knows and is fully prepared for a “Pole Shift” that is expected to occur round or about March 15th of this year (about 6 weeks from now).  Upon disclosure of this troubling information, Alex Jones immediately dropped her from the air and went to a commercial break.  He later edited the segment “out” of the show from his subscription based archive to the dismay of the “paying subscribers” like myself.

Time to terminate that subscription in Jesus Name.

Regular listeners from across the globe are ALARMED by this woman’s call and have submitted You Tube video “appeals” to Mr. Jones asking for him to MAN UP and explain why he cut the woman off.  If you search “You Tube” for the terms “March 15 Pole Shift” you will find such videos.

Something very weird is going on here …

PRAISE YOU FATHER GOD …
WE GIVE YOU ALL THE GLORY

Links to Some of this Information

I’m sorry for those of you who are unable to access You Tube videos because of “dial up” limitations.  Fear Not!  In Jesus name just make sure you have enough OIL in your Lamp and seek the Baptism of the Holy Spirit IMMEDIATELY.

Here below is an appeal on You Tube from the gentleman seen in the picture above:

Gosh folks I hate being the harbinger of bad news.  In fact I much rather help everyone understand that our transition into the Heaven’s with our King Jesus is the whole reason for our existence anyway.  Right?  We are not supposed to love the things of this earth and we have been instructed to be like Jesus, read and preach the gospel, and prepare ourselves spiritually for the return to the Kingdom of Heaven.

I don’t like the idea of “going underwater” Amen!  But I DO LOVE the idea of returning to the Kingdom of Heaven with my Lord and Savior Jesus.  Six months ago I might have panicked and told my wife in utter horror, WE HAVE TO LEAVE FLORIDA NOW!!

Whether the Lord decides I am worthy and have enough oil to be “called up”, or he decides the “rain that falls on the unjust must also fall on the just”, I am fine with the cup I am meant to drink and look forward to the Heavenly Rewards system in 1 Corinthians 3:13-15.  Praise God for he is merciful and loves us, and the time has come for us to be 100% ready to GO BACK to the Heaven’s from which we came.

I hope this “Pole Shift” report is only an early warning cry and the timing allows the members of the Kingdom to call more of God’s people to JESUS.  But you never know.  In fact you don’t know if you are going to die in a car crash today either … do you?

GLORY BE THE THE KING OF KINGS
PRAISE BE TO YOU
YESHUA JESUS MESSIAH
WE LOOK FORWARD TO YOUR IMMINENT RETURN
DIE IN THE FLESH AND LIVE SPIRITUALLY FOR JESUS
THE ANGELS IN HEAVEN SING PRAISE FOR YOUR RETURN
GLORY BE TO GOD
WHO WAS, AND IS, AND IS TO COME