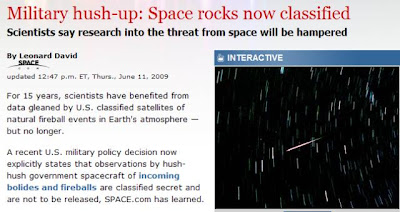 Well if by now you haven’t figured out that 9-11 was a government sponsored terrorist attack against our own country then you are a sitting duck for the next “terrorist” attack. The fact is folks, if this is the case, you are horribly asleep at the wheel and completely clueless of what is going on around you. I personally feel very sorry for you. You really need to step away from the “gosh darn” television and find another hobby. How sad we have become in this country. Sometimes I feel like we deserve the pain that is going to be brought upon us all. Other times I just pray, and pray, and then type some more into this forum.

You see the reason WHY the US Government has classified access to their nuclear explosion watch-dog satellites is because they do not want the scientific community “ratting” on their diabolical plan to destroy several US cities with nuclear devices. Understand that, if the scientists could SEE the satellite data during and after the attack, (as they are with similar data with 9-11 today), they would call “BOVINE-FECES” and tell the US people that something is NOT RIGHT!! They want the next QUOTE (gag) “terrorist attack” EN QUOTE (gag-more) to LOOK FAR WORSE THAN IT WILL BE. They want the country to be horrified WAY worse than they already will be. So they are TURNING OFF THE CAMERAS so nobody can see what they ACTUALLY DID!!

The article actually says this:

“Scientists say not only will research into the threat from space be hampered, but public understanding of sometimes dramatic sky explosions will be diminished, perhaps leading to hype and fear of the unknown.”

I will work on posting more information I have connected together that further indicates the next MAJOR “terrorist event” will probably be nuclear in nature. I would bet on it.