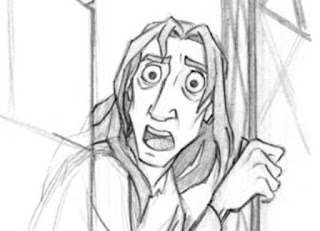 Satan is Man / Satan is Woman
Confusion is King!

All throughout history, even back as far as 6,000 years plus, Satan has manifest himself in many different ways.  From the mystical writings found in Job about Leviathan, to the clay impressions of UFO “like” space craft on Sumerian tablets, we find endless “trickery and deceit”.

AND LOOK AT US

We are sheep.  Indeed gullible.  People are following many different “gods” across the world.  Even amongst the Christian ranks is confusion.  Deceit and confusion is the best weapon the enemy has.  The road to Heaven is laden with deceit and trickery.  There is only ONE WAY to Heaven and that is DIRECTLY through a personal relationship with Jesus Christ and salvation through the forgiveness of SINS which can be given ONLY through the Father whoart in Heaven in “Jesus Name”.

Many are called and few are chosen.  Make sure YOU ARE CHOSEN and Jesus knows who you are when this all culminates in even greater confusion in the very near future.

Who is Lucifer / Who is Satan?

Here you see one of the leading Masons, indeed a forefather, letting their leaders worldwide know who they worship in their “religion”.

July 14, 1889 – Albert Pike issues instructions to the 23 Supreme Councils of the world. He reveals who is the true object of Masonic worship: “To you, Sovereign Grand Instructors General, we say this, that you may repeat it to the Brethren of the 32nd, 31st and 30th degrees: The Masonic religion should be, by all of us initiates of the high degrees, maintained in the purity of the Luciferian doctrine.”

– Quote from Morals and Dogma

Satan, the great deceiver, hides throughout history in many forms. Also Satan (Lucifer), is represented or “manifests” as ultimately a “hermaphrodite” having both sexes simultaneously – or indeed – also separately. This is important to understand when identifying the enemy for the lost. The Bible refers to the “sheep and goat” judgements. Christ is the “Lamb” of God, and we are the sons of God (brothers “in Christ”). The “goats” reference is the enemy of the Lamb that the Lamb will ultimately put under its foot in the end of this spiritual war. So if you search Google on the term “Baphomet” you will see the Satanic picture of a horned goat creature – indeed a “hermaphrodite” creature of both sexes. 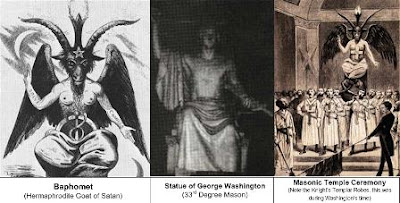 Female Manifestations of Satan
This concept is important in order to grasp the significance of all the manifestations of Lucifer / Satan over history since ancient Egypt (and beyond). The Bible refers to the “god” Artemis in Acts 19:24-35. This is the goddess Diana. Ephesus had the largest worship temple to the goddess Diana (Artemis) in the world. The apostles were surrounded by demon worship and satanic ritual sacrifices in the temples of the enemy. 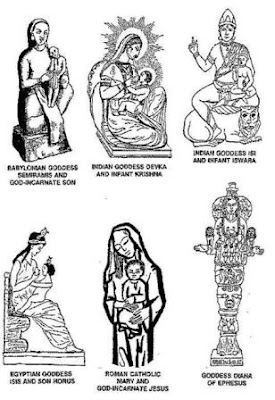 Diana is a female manifestation of Satan. So throughout history, as far back as ancient Egypt (an Ur), you have Semiramis (Queen to Nimrod), Isis, Diana (Artemis), and now today you have the “goddess” Diana manifest as the “goddess” Mary – Satanic queen and indeed the Whore of Babylon – the papal abomination. This “goddess” Isis/Diana/Mary will descend as the Whore of Babylon from the City with the 7 Hills, upon the Temple of Solomon ushering in “Apollyon” of 9:11.

Queen Semiramis, (Isis / Diana) to the Forgery of Mary
(Note the Crown on Mary, crowned as “goddess”)

In 431 A.D., Emperor Theodosius II, called a general church council at Ephesus to DEBATE if “The Virgin Mary” should be described as “The Mother of God” (“god”).  Two hundred Bishops attending this “Third Ecumenical Council” voted decidedly “yes”.  This was a ‘coup de gras’ for the Pagan influence embedded in the church and ultimately has led millions of followers to this heretical notion that it is okay to pray directly “TO” a saint.  Or pray directly to “Mary”.

Note: Anyone who does not go directly to the “Father” whoart in Heaven, and ask for forgiveness is NOT forgiven of their sins.  Anyone who does not pray directly to the Father, whoart in heaven, is praying to an idol.  This is fornication in God’s eyes.  It is all throughout the Bible.  In fact, you are unwittingly praying to the “goddess” Semiramis, Isis, Diana / Artemis.

Satan is About to Be Born … Again!

THIS IS WHY there is an “obelisk” and a “dome” located in the courtyard of the Vatican. The “obelisk” represents the male characteristic, and the “dome” (which is located atop of the actual Vatican) is the female characteristic. The “obelisk” will symbolically “impregnate” the dome (womb) and the goddess Semiramis / Isis / Diana (Artemis) / and Mary will emerge (be born) and take over the WORLD.

Important Note to the Reader:

This is not a slam on Mary.  She was the beloved and blessed virgin mother of Jesus.  These references to Mary (Isis / Diana / Artemis) are a SATANIC forgery that includes Mary as part of their vicious plan to mislead people into doing things they should not be doing.

Paul, when dealing with the Diana / Artemis worship problem was followed around by a possessed woman who performed divination for the merchants that sold Diana idols.  Here Paul tells the demons to “come out of her”.

But Paul, greatly annoyed, turned and said to the spirit, “I command you in the name of Jesus Christ to come out of her.” And he came out that very hour. 19 But when her masters saw that their hope of profit was gone, they seized Paul and Silas and dragged them into the marketplace to the authorities.

Then later in Revelation we see a similar use of the phrase “come out of her”:

And I heard another voice from heaven saying, “Come out of her, my people, lest you share in her sins, and lest you receive of her plagues. 5 For her sins have reached to heaven, and God has remembered her iniquities.

I am drawing no particular conclusions with this article.
I am only leading those with “eyes to see and ears to hear” to the water of Life.

This is NOT an attack on the Catholics, but a wake up call.

This is REPROOF against the ultimate evil.  Satan and his minions.  Satan – who has infiltrated ALL RELIGIONS and it attempting to lead everyone straight to HELL.

0 514
Worthy to Escape these Things

10 thoughts on “The Enemy’s Multiple Personalities”