DEMONS HURTING CHRISTIANS
Are You Qualified for Battle?

This is tricky business. It begs a number of questions.  Can a demon hurt a born-again Christian?

To EVERYONE I recommend reading “He Came to Set the Captives Free”.

For those less inclined to read this awesome book, I believe that yes, demons can hurt Christians.
BUT LET ME QUALIFY THIS.

He Came to Set the Captives Free

If you have any concerns at all regarding this subject, I cannot more highly recommend you buy this book and seriously study it.  I have read it twice and intend to read it again. It is loaded with scripture and real life experience that will captivate, educate, and amaze.

It is a book of horror, revelation, victory and advanced spiritual warfare education.  It will help you understand what we are up against with real-world testimony.

The writer of the book, Rebecca Brown M.D., was called by God into a small town in middle America, to help save people who had been lured into the “Brotherhood”.  It describes in great detail the recruitment process into the Brotherhood.  It tells how Satanist gravitate to Hospital jobs (particularly intensive care wards) so they can “steal the souls” of people on their death beds.  It will give you a reality shock when you realize the sheer “Hell” Rebecca went through as she tried to rescue her friend Elaine from the clutches of this extremely powerful group of Brotherhood members.

Anyone who knows ANYTHING about the enemy, knows about “The Brotherhood”.  They are surpassed only by the “Illuminati” in their Satanic power and evil-doing.  They are routine ritualistic baby killers.  That’s as far as I will go to explain the threat.  You need to put aside your television shows for a few nights and READ THIS BOOK.

Important Note to Readers of the Book:

Rebecca Brown had to routinely seek assistance from a church leader.  This church leader helped her drive out demons on occasion.  While it was not stated in the book, I believe it is highly likely this church leader had the Baptism of the Holy Spirit and she did not.  Just something to consider while reading the book.  Her greatest victory in driving out a powerful demon happened when she read the Book of Revelation to the demon attacking her friend.  The Word of God is ALIVE. 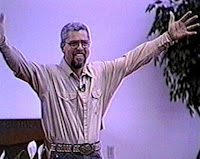 Also – David Hogan’s testimony (toward the very end) in the YouTube video series “Faith to Raise the Dead”, tells of a horrific event where he and his team went to a VERY DARK place in central American to heal a woman and chase out some demons.

The short version is that God told them to MAKE A RUN FOR IT and for darn good reasons.

If you want to watch this series, here is the link:
http://www.youtube.com/watch?v=PWmDMljLj5E&feature=PlayList&p=34AF4F088F8F1C0B&playnext_from=PL&index=0&playnext=1 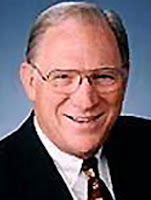 Another testimony in regard to this topic is revealed in the Chuck Missler series, Alien Encounters here:

In this series, Pastor Missler tells of a story where he was preaching about “Aliens being Demons” and that he was positive that Christians (born-again Christians) could NOT be abducted by aliens (demons). But later he had to recant. Evidently Pastor Missler was called on the telephone (after the lecture) by a well known government official who was there.  This official did not agree that Christians could not be abducted by these “alien demons” because it happened to HIM.

After some interaction, Chuck discovered this highly credible “born-again” abductee had dabbled ever-so-slightly in an occult practice. Was it “astrology”? He didn’t say. But it “opened a door” to the demonic and this man was “attacked” by demons.

What Are The Requisite Qualifications?

The other thing to consider is: What are the actual qualifications necessary to adequately fight the worst demons? Being born-again implies true salvation AND a STRONG RELATIONSHIP with JESUS.  This does not result from an altar call.  Relationship building and faith building both take time.

The other thing to consider is this. It is reasonable to suggest that virtually ALL the churches during the Apostle’s walk on earth had the Acts 2:2 Baptism of the Holy Spirit? Why wouldn’t they? Those were the days when everyone expected to get it and went after it aggressively. Even Simon Magnus the sorcerer tried to pay for the power before Paul told him to get lost. It was a “big deal” back then. AND it should be ESPECIALLY today!

David Hogan had the Baptism of the Holy Spirit and spoke in tongues (as evidence) and God told him to “make a run for it”.

I believe everyone should take the Divine Healing Technician Course AND the Spiritual Warfare course from John G. Lake Ministries. 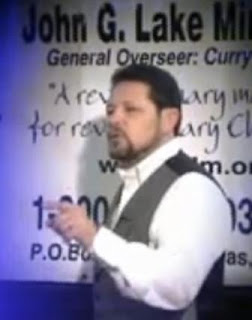 Pastor Blake Tells you to Just Do It!

Here is a link to the Divine Healing Technician Course:
http://www.jglm.org/index.php?page=shop.product_details&flypage=flypage.tpl&product_id=306&category_id=41&option=com_virtuemart&Itemid=1

Here is a link to the Spiritual Warfare Course:
http://www.jglm.org/index.php?option=com_virtuemart&page=shop.browse&category_id=62&Itemid=1&TreeId=7

You can start with the Spiritual Warfare 101 teaching as I am.  These are not inexpensive trainings.  But the money you spend preparing yourself to DO what JESUS said to do, is a form of “giving” to the church (body of Christ) because it “benefits” the mission of Jesus as long as you don’t just sit there and learn.

You MUST go out and use the training and follow:

And He said to them, “Go into all the world and preach the gospel to every creature. 16 He who believes and is baptized will be saved; but he who does not believe will be condemned. 17 And these signs will follow those who believe: In My name they will cast out demons; they will speak with new tongues; 18 they will take up serpents; and if they drink anything deadly, it will by no means hurt them; they will lay hands on the sick, and they will recover.”

Or you can buy Rebecca Brown’s book on this topic entitled “Prepare for War” to save money.  If you expect to “go into battle” at some point, the more training you have the better.

And remember, God wants you to be properly prepared.  He has given you all you need in his Word.  But the Word of God is VAST and can be challenging to understand because of its size.  The Bible talks about “teachers” appointed by God because these people have the proper qualifications and the divine leading of the Holy Ghost.

If you are going to get a heart transplant, do you go to your neighborhood physician?  Go to the experts and make sure you get the whole teaching from those experienced in this specialty.

Everyone should listen to David Hogan’s testimony, and read the Book, “He Came to Set the Captives Free”.  This is a MINIMUM.

And everyone should seek the Baptism of the Holy Spirit.

When it Comes to Fighting Demons
Being saved alone, is like being a “first semester” Christian
Not sure if I would want to go up against such forces with only first semester training

BE BLESSED IN JESUS NAME!!

0 355
ORIGINS AND ORACLES: The Missing Link to Everything