Its often been said that one cannot fully understand the Old Testament of the Bible without “inserting Jesus” into the idioms and mysteries throughout.

As Augustine put it:

In fact if one were to put a full effort forth into a Biblically sound study of the period of “Pre-Adamic” earth and the Satanic Rebellion, he would unquestionably arrive at the same conclusion.  Our very existence, arguably even the energy force that holds matter together, originates and emanates from the loving power of our Lord Jesus Christ.  The examples of this are fabulous.

From the mysterious positive and healing energy fields uncovered through the study of “orgone”, to the mysteries of water’s reaction to “negative and positive forces” discovered by Masaru Emoto in his book “Messages from Water”, to the discovery of the “cross-shaped” protein force holding the human body together, called “Laminin” – we find ourselves in constant awe at what we cannot fully comprehend.

However what is most fascinating is how those who do not know Jesus as their Lord and Savior can embrace an onslaught of extraterrestrial proportions, existing for thousands even millions of years, but cannot embrace this same TRUTH as the motivation behind it all.

How is it someone like Michael Tsarion, David Icke, or even Jordan Maxwell can spend their entire lives unraveling this age-long supernatural attack against all of humanity, and not realize the attackers themselves have “motivation”?  Whatever happened to the principle of “quid bono”?  WHO BENEFITS?  Surely they don’t really believe we are all cosmic life forms that will be saved by some obscure energy which emanates from an internal god-like force called LOVE.  Or is it that they ARE correct in that belief, but have missed the most important conclusion of all, which is that JESUS IS LOVE?

Stitching History Together with Motivational Glue

As I reverse engineered the motivation behind the establishment of the New World Order, there was a missing link.  Just as the Hebrew scholars have struggled with identifying their Messiah without the glue called “Jesus”.   When you can’t put your finger on the “God particle” nothing makes sense.

One of the most revealing and haunting quotes of all time came from Woodrow Wilson when he said: 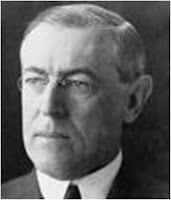 ” [they] … are afraid of somebody. They know that there is a power somewhere so organized, so subtle, so watchful, so interlocked, so complete, so pervasive, that they had better not speak above their breath when they speak in condemnation of it.”

How utterly sad it is that all these victims fail to realize who that SOMEBODY is.

When you reach back through time, from the ancient Sumerians, to the Babylonians, to the migration of the Phoenicians, to the Roman Empire, into the “Black Nobility” roots of the German-Dutch, European, and Scottish Royalty, and even into the darkest reaches of the ‘far East”, there is a trail of bread-crumbs that have surprising similarities and foundations.

BUT THEN IT HIT ME

These people.  Hundreds of thousands of people over six thousand years of recorded human history, were infested with “DEMONS”.    And one could argue, you must insert the term “alien-demons” to capture “The Rest of the Story”.

No wonder people mistakenly embrace the concept of “reincarnation”.  There is no such thing as reincarnation.  But there absolutely is a such thing as powerful demons that can move from one body to another.  An most horrifically, there obviously is a such thing as a physical manifestation of an “alien-demon” that can use genetic trickery to recreate “FIT EXTENSIONS” for themselves to inhabit in order to maintain control through demonically infested BLOODLINES.

From Nimrod / Horus / Osiris / Isis to the great leaders of the Nations throughout the earth today, we have an occult infestation of the most powerful demons that have ever existed.  And “THEY” have an agenda.  This agenda is demonic.  This agenda is POWERFUL.  This agenda is a WAR AGAINST GOD.  This war’s ultimate motivation is the utter destruction of everything having to do with the “seed of Abraham” and OUR saviour Jesus Christ.

So there lies but one conclusion that can be drawn from all this.

THE ANTICHRIST COMES FROM “THEIR” SEED

Isn’t it remarkable that the only Bible scholars that actually “get it” are the ones which have no “formal theological education”?  While a few of them have “slipped through the cracks”, such as Chuck Missler with his daring attempt to conquer the UFO phenomenon, it seems they all have limits to how far they will allow their “hypothesis” to venture.

The intent of this article series is not to be a substitute for your own research.  Instead however, I hope to instill in you a desire to understand what some have found to be the obvious.  And admittedly one could argue there is NOTHING obvious about any of this.  That is … until your “frame of reference” is re-adjusted.  Once you see the “big picture” the mysteries becomes unravelled.

Or as Jonathan Kleck would put it, “The Mystery is BUSTED”.

Calculating the Number of the Beast

If you type into “Google” the phrase “people who calculate to the number 666” or something similar, you discover what Tim Cohen says is true.  Throughout all of history, people have been doing an amazing job of calculating the number with a particular name in mind.

For those of you who are “cryptography” buffs, in or around 1998 or so, the computer industry launched a challenge for the cracking of the Data Encryption Standard, known as DES.  Basically what they did was issue a DES encrypted disk with data on it.  They handed this disk out to the participating challengers and told them to “decrypt it”.  And in fact they successfully did decrypt the data in a surprisingly short period of time.  The winner was “The Electronic Frontiers Foundation” or EFF.  It as a big deal.  Nobody wanted to use “DES” any more to encrypt their data.  Everyone believed the algorithm was flawed.  THEY WERE WRONG.  The algorithm was not flawed.  The TEST CRITERIA was flawed.

Similary when you look at all the calculations of the “number of the beast” you find a similar paradigm occuring.  The testing criteria has flaws.  Whenever you take a “blob of data” and cyprtographically bombard it with math, eventually with enough minor adjustments to your “test criteria” you will get the results you desire.

This is why virtually everyone from Hitler to Ronald Regan, to Barrack Obama calculates to 666.  And I don’t discredit the math because frankly I suck at math.  However I do question the criteria.  I do question the “frame of reference”.  While I have absolutely no doubt “Obama” has a very sinister name sequence that matches up dramatically to the number of the beast, I cannot forget that the Bible warns us there will be “many” Antichrists.

What if you raise the mathematical bar on the calculation and change your frame of reference?  Would this not make the results more plausible?

Not only does Tim Cohen, in his book “The Antichrist and a Cup of Tea”, raise the mathematical calculation criteria, but he weaves in the necessary scripture to set the appropriate “frame of reference”.  I highly recommend you invest in the book.  When you consider that Mr. Cohen has used both the English and the Hebrew spelling of the formal name for Prince Charles of Wales” and makes absolutely certain he is using the SAME numbering system that was used by the ancient Hebrew scholars as far back as Babylonia, AND you see that he extrapolates the numbers from the “single character” GREEK from the indisputable authentic text of the Textus Receptus, you have a dangerously complex formula that is has a probability of accidently occuring that exceeds 1 in 10 to the 50th power.  In fact it not only exceeds that factor, it actually DOUBLES IT.

I DON’T THINK SO

Adding a Cup of Reptilian Tea

And Tim Cohen has no concept whatsoever of the intergalactic cosmic nature of this Satanic onslaught against humanity.  When you further adjust your frame of reference to include the dynamics of the Satanic rebellion, and factor into the equation this Reptilian, Pleadian, Orion, Draconian warfare scenario, and dump a gallon or two of Mystery Religion combined with a dash of Secret Societies over thousands of years of time and “viola!”….

You have the Antichrist.

Maybe Prince Charles of Wales isn’t the actual “mack-daddy” Antichrist.  Maybe HE is only the “predecessor”.  WOW. What are the implications of that possibility?  Yikes.  Is this genetically altered reptilian body of Charles the actual body that will take control of the World?  Maybe … maybe not.

Here are some of the points to consider regarding this particular world leader for this dubious role.

All things considered, as unassuming as he appears to be in the natural, this guy fits 110% of all the necessary qualifications.  I personally do not draw any conclusions but find this analysis most astonishing.

From the Canaanites, to the Phoenicians, to the Black Nobility, to the East India Company, through the Opium Trade and the wealth of the Commitee of 300, down through our Satanically controlled global governments and educational institutions and “religous systems” there has been a …

“power somewhere so organized, so subtle, so watchful, so interlocked, so complete, so pervasive, that they had better not speak above their breath when they speak in condemnation of it.”

WELL I CONDEMN IT HERE AND NOW
SATAN AND YOUR DEMONS
I COMMAND YOU, IN JESUS NAME, BACK TO HELL WHERE YOU CAME FROM
YOU LOSE
WE WIN
BE DAMNED TO THE LAKE OF FIRE
IN JESUS NAME