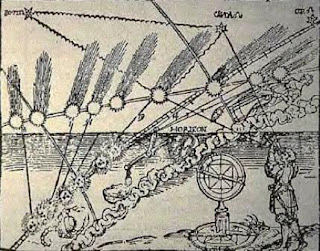 A Cosmic Epiphany
And Request for Comments

Well let me just say this has been an interesting day to say the least.  I begin this article with a disclaimer.  I do not pretend to have any “special information” and I cannot say for certain what happened to me today was anything other than a coincidence.  Right?  Well maybe it was.  Maybe what “hit” me just popped in my head.  Maybe the article I stumbled upon as a result of the subsequent search was an accident.  Maybe the fact the article actually had a picture of the same hieroglyph that Jonathan Kleck was led to was yet another “coincidence”.  Let’s be real … after all … maybe, just maybe it was.  I really don’t know for sure.

A Quick Review of the Unlikely

Any one who has been following Tribulation-Now for any period of time knows how I didn’t believe in the whole UFO deal “out of the gate”.  I learned about the New World Order back in 1988.  I didn’t even realize the World Trade Center event was an intentional super-nano-thermite demolition.  When I started my research, as I’ve mentioned in previous articles, I read Nostradamus’ World War III writings and when I saw his prediction of this “cosmic UFO battle” I tossed the whole thing aside and yelled “Balderdash”.  And now hardly an article slips by me without mentioning this “alien-demon” onslaught in some fashion or another.  Is it an obsession?  I don’t think so.

I remember when I bought my ESV Study Bible.  I was attracted to the commentary and all the great maps.  I can’t remember which verses I stumbled across but I was “taken back” by the use of the word “cosmic”.  All this “heavenly hosts” stuff and “cosmic” stuff.  I was like … you’ve got to be kidding me … Right?  Well…

Even my wife thought I stepped off the deep cliff.  I had her watching “The Reptilian Agenda” DVD from David Icke.  That didn’t last long for her.  The number of amazing “coincidences” that have pushed me into this “cosmic stuff” is utterly unbelievable.  Never mind that a colleague of the author of “Behold a Pale Horse” was led to become a friend of mine.  His name is Kenneth.  I spoke to him earlier today on the phone.  Ken worked with William Cooper a few years back and is keenly aware of this “cosmic” dynamic.

As I reflect back on all my research, this UFO / Cosmic deal kept popping up.  It’s all over the ancient Egyptian, Sumerian, and Babylonian artifacts and artwork.  I’ve connected this “weirdness” in a number of articles to a “thirst for blood” and an attack on the Abrahamic “bloodline” many times.

I’ve always wondered what it was the Vatican was hiding from us.  I recently published an article entitled “Watching for Wormwood” (read it).  For far more than 2,000 years, SOMETHING has been after the integrity of our SCRIPTURE.  There are arguments even today about the integrity of the interpretation of the King James, due to its connection to the Masoretic text.  These demons have been trying to hide something from us for an extremely long time.  It seems today, without the help of the Holy Spirit and an EXTREMELY open mind, you can’t figure anything out with any certainty.  I have all the translations of the Bible that money can buy.  And no matter what, there is still no certainty in anything other than …

JESUS IS KING
AND HE IS THE ONLY WAY TO SALVATION

So as I am being led down all these amazing pathways and the Lord is bringing various “specialists” to me, I am discovering things that are nothing less than astonishing.  When I listened to Michael Tsarion’s work regarding Atlantis and the genetic onslaught, it was all based on “mythology”.  Now mind you it was utterly disturbing and for someone who was not as anchored in Jesus as I am – it would have been a guaranteed ticket straight to Hell.

When you dig into this stuff you are quick to discover that Lucifer was running the “show” for a very long time after he and his “fallen angels” (turned “demons”) were scattered all over the “cosmos”.  Evidently there was “inter-planetary” commerce back then.  This whole “Atlantis” deal really happened.  These movies you are seeing such as “Clash of the Titans” are not that far off course.  All these “things” that were walking the earth, such as “centaurs”, may have actually existed at one time.  No wonder God was utterly disgusted and wanted to destroy all of mankind.  It was a HUGE MESS.

And Look at Us Today

If you completely disregard all the “Knights Templar” expeditions to hide things from us, you still have “gobs” of data that indicates we are missing some major information.  Has it occurred to you that the Scientologists are into the “cosmos” and believe the whole UFO Messiah deal?  Has it occurred to you the Mormons believe that Jesus was the brother of Lucifer and it’s all about what is “coming to earth” from far, far away?  Did you know that?  It’s TRUE.

There’s simply no way the Bible could be referring to “cosmic” events … right?

What Happened to Me Today

So I am doing my “day job” deal.  Just another fun day in corporate America.  I feel led to call my sister and tell her how in Love I am with God and his Son Jesus.  I tell her I can no longer pretend to care about anything else.  She is thrilled and promises to pray for my ministry and future.  We discuss how God will “clear a path” and pay my bills so I can devote all of my time to his work.

I go back to my desk and start working.  Out of the “clear blue” I hear the word “Arcturus” in my head.  Arcturus is the star system that Maximilien De Lafayette says there are “humanoid aliens” that supposedly feel compassion for the poor earth folks because they are currently being targeted by the “greys”.  Yeah – I know – weird stuff… pretty darn unbelievable.

But then I feel really strongly that I should search on the word “Arcturus” in the Bible.  So I fire up my Internet Explorer and go to Biblos.com.  I type in the word “Arcturus” and I get a hit – In Jesus Name – AMEN.  The word shows up in the same passages of Job and Amos …BUT ….THERE’S A CATCH!!

Now I am looking at multiple parallel translations side by side.  GET THIS!  It turns out that “Arcturus” is translated into the word BEAR in several translations.  WOW.

All of a sudden it hits me.  The “BEAR” from the North.  Think MAGOG, and GOG!  Think about those verses.  Look them up please.  The Bible refers to those locations in the “cosmos” with “South” and other locations like that.  North, East, South, and West.  Cosmic in nature.  Wow.

Since I was 9 years old I’ve listened to Jack Van Impe expound on who Magog, Gog and Rosh were.  It sounded like a bit of a reach to me.  But I bought the whole deal.  Wouldn’t you?  And quite frankly I am not sure mabye Jack is still right about that.  And praise Jesus Jack didn’t suggest Gog and Magog were from the star system Arcturus because I would have written him off to the “rubber room”.  Isn’t it absolutely fabulous how God waits to reveal things to you when you can actually “handle it”?

I have utterly no idea if this was from God or not.  Under the circumstances it “kinda” makes sense.  I admit I’m not running for president because God told me too.

What if the Satanic onslaught of our Prophetic understanding has been immaculate?  Could we have underestimated our enemy Lucifer?  The original “Jekyll and Hyde”?  The “Light of God” but the darkness of “Satan”?

Maybe all of our traditional understanding of “end-times” prophecy have been “lacking”?  What if the Temple is in the BODY and the “Temple Institute” is a demonic distraction?

Could we be facing a DEMONIC onslaught from Arcturus?  Could it be from an army from a place called Magog with a leader called Gog?  Do we need to re-read Ezekiel with a new “frame of reference”?  Is it possible the whole Iran war deal is a distraction setting us up for a big surprise?

I SUBMIT TO YOU …  IN JESUS NAME

A REQUEST FOR COMMENTS….
My email is jbaptist777@gmail.com

Aaron – please stand by for an onslaught of input.
God Bless You for Responding to the Lord’s Call

BE BLESSED IN JESUS NAME!!!!

Right after I was led to this whole Bear = Arcturus thing I typed “Magog, Gog, and Arcturus” into Google and check out this web link

NOTICE IT HAS JONATHAN KLECK’S HIEROGLYPH SHOWN WITHIN IT!

0 586
A Little Church on Wednesday Night