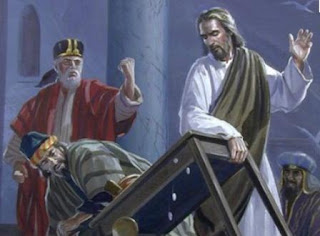 Jesus Used a Whip
Sometimes Indignation is the Key

I was sitting at my “headquarters” this morning, thinking to myself (and sharing with others) that things are rather quiet.  Perhaps the quiet before the storm… Amen?  I’ve come to my walk in Christ where I rather dislike those who perceive themselves as “Holier than Thou”.  Quite frankly it rather disgusts me.  And I continuously look for signs from the Lord as I “turn over the tables in the tabernacle” on His behalf.

Well today I turned over some tables.  And I was “astonished” to see the Lord send me a sign that I was “okay” doing so.  I was in tears of victory all the way home.

We Live in Different Times

Today we live in different times.  Amen, we are definitely in the very “end of times”.  Some might say, that doesn’t change how you should act, and maybe that’s true.  I don’t know.  But I sure do take a LOT of crap from “self righteous” christians (note the lower case “c”) and so do other “thought-leaders” from Tribulation-Now.

The Lord made it clear to me, from now on, I am to delete and filter any person who emails me and “stirs up” crap.  Amen?  So read on if you wish, but if you email me with your nonsense then please do not expect a response.  Okay?

In one of the Gospels Jesus didn’t just turn over the tables, he indeed used a whip.  Do your own homework.  This does not mean Jesus wasn’t a pacifist, it means he had EMOTIONS.  He got angry when it was “righteous”.   He got sad and bled tears of blood, when it was understandable.  We have been programmed to believe that we cannot have “righteous indignation” and I believe that is completely untrue.

If you feel you do not agree with me, then “let every man seek his salvation with fear and trembling” okay?

AND THIS MEAN YOU!  AMEN?

Go set up your own ministry and your own web site and “bug off” in Jesus Name.

I look and listen around me in continuous prayer to the Lord.  I expect to hear God speak to me at all times.  I am especially sensitive to it when I am “out in public” Amen?  Sure.  Why wouldn’t you be?  Hebrews says that you might entertain Angels unaware.  So I have NO INTENTION  of upsetting God’s Angels.  Certainly not at this dark and dangerous hour of victory!

So today was rather quiet on the “intelligence front”.  Frankly I got bored.  I decided to go down to the local bistro for some Sumerian ale and time with God and the Tribulation-Now information feeds.  I sat down with my “netbook” and started responding to emails and instant messages about Planet X and Elenin being two different cosmic objects.  And indeed they are. You bet.  Elenin they claim is “intelligently controlled” (no way) and the other is a Brown Dwarf just going through its typical path.  God = Intelligent Design.  Get it?   Can you say “Wormwood”?

A LOT of them.

He continuously tried to make fun of me by bringing waitresses over to the table and tell them “that he wanted to be with them at the end of the world”.  I was originally interested in what he had to say because he told me “up front” that he had heard about the forthcoming “pole shift”.  I told him if he continued to speak about women in a manner of mental “fornication” that he needed to leave my presence immediately.   It continued.

This fellow went on to inform me of how everything I thought was true, was a “myth”.  Evidently before he became a drunkard, he used to be a writer.  He addressed all of my input with a smirck and a smile of condescension.  I became weary of his disregard for the Kingdom of Jesus Christ and my Lord.

An Extension of Kindness

I told the waitress to bring him any food or drink he desired. I explained to him my money was from the Kingdom of Heaven and it was his as much as it was mine.  He thanked me.  He continued to ask questions and denigrate me with his devious smile and doubtful responses.  He even raised his hands into the air and said “Yeshua” is my King.  I was NOT HAPPY.

It was done out of utter disrespect.

I let him stay at my table and feed off the bounty of my King.  I continued to take his badgering and kept responding to him that if he wanted to seek the “easy way” to his notion of Heaven he needed to go to a church down the street and I would not LIE to him and tell him he could act this way and be guaranteed anything but a ticket straight to Hell.

All of a sudden, a young man from a table behind me yelled out.  He said “Hey you know about Planet X and Nibiru God Bless You!  I jumped up from my table and ran to give him a big Jesus Hug!  We exchanged phone numbers.  I could not believe the timing.

Shortly thereafter another friend stopped by and said what’s going on with this weird end of the world situation.  We witnessed to eachother in front of this mean fellow and all was “supernatural” as I would expect from my God.

THEN a man named Craig from Homeland Security stopped by my table and said that he was interested in understanding the news that was coming in about March 15th and this supposed “pole shift”.  We talked openly and others chimed in.

After this amazing and supernatural exchange of information and hugs on the porch, this unfortunate man in his disrespect for our King, continued to denigrate the Kingdom with his nasty mouth.

While I am not proud of what I said, and asked forgiveness of my King, after 2 hours of trying to reason with this “fellow” I simply told  him that …

Am I sorry for using the F bomb on this man?  Yes!  But sometimes you have no choice but to speak the language they understand.  It might be the only words they comprehend.

The Heavenly Rewards System Kicks In

Feeling sad that I let my King down and dropped the “F” Bomb, right in the middle of that verbal skirmish, I got a call from an employer.  My background check evidently passed and they want me to meet them in Jacksonville for a happy hour and a job offer.

It will almost certainly be for more than 100K a year.  As much as I can, will be given to my King!

May God’s will be DONE!

Do you think for one minute that Jesus doesn’t know the times we live in?  Come on.  We need to try as hard as we can in super difficult situations.  Was I proud that I used the “F” bomb on that guy?  No.  Was it what he probably needed to hear?  Yes … I suspect so.

I am not recommending that you start shouting the “F” bomb at people.  I cried out to God that he forgive me for using that word.   But DON’T lie to people and let them think they are saved because of some crap they have burned into their head.

Jesus Christ is our King

He is the Love of Our Lives

I Love Him With All My Heart

TELL PEOPLE
THE TIME IS NOW
BAIT YOUR HOOK APPROPRIATELY
IF YOU HUNT SHARK,
BAIT THE WATER WITH BLOOD AND CHUM
GIVE YOUR HEART TO THE KING
JESUS IS THE ONLY WAY TO BE SAVED FROM HELL

… even if it hurts their feelings a little bit.

Turn OVER the Tables in the Tabernacle Once in Awhile