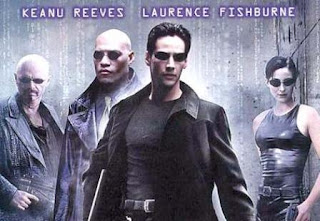 I used to watch more movies in the past.  These days I spend far more time researching stuff for the salvation of people’s souls for our King Jesus Christ.  I, like many Christians, feel more led to spend my time reading and studying the Word of God than wasting it watching movies.  So I tend to be quite selective.  And frankly I don’t appreciate hearing the Lord’s name taken in vain.

As the research into this total onslaught of mankind continues, it has become rather shocking how many movies have hidden messages woven into them.  Wait until you hear what was uncovered regarding the “All Seeing Eye”.  But for now let’s focus on the hidden messages in the Matrix and how it can help save souls for our King.

The Fingerprint of the Holy Spirit

As more and more of this information is unravelled, it becomes quite apparent that God is not letting the demonic have their way without getting “a word in edge-wise”.  In fact, it appears God has made it perfectly clear that He is going to have a “say” in everything whether “they” like it or not.  I find this utterly fabulous.  It’s amazing to me just how many places you find God’s “stamp” of salvation.

When we are able to recognize this “stamp” we can point it out to people.  This “fingerprint of the Holy Spirit” is everywhere.  I believe the most astonishing evidence is in the Dollar Bill prophecies found by Jonathan Kleck (see the “Aliens, Demons, Nephilim, Time Travel and God” articles).  Here you see a case where only God could have “caused” those graphics to appear in the dollar bills.  In fact the $10 bill and $50 dollar bill show events that have not happened yet.  And Jonathan was told by God to disclose this information to the FBI.

It doesn’t get any better than that!

Many years ago I watched the Matrix like many other people did.  But like so many, I didn’t see the fingerprint of the Holy Spirit in the movie.

Now I am not an expert at all the Godly “double entendre” in that movie, but when you watch it with a keen eye toward the message of salvation it is rather fabulous.  There are scenes in the movie where the heroin, Neo, looks down a “dark road” and is told “you do NOT want to go down that road”.  You have the “leader” of the resistance, a fellow named Morpheus, whose life is sacrificed for the salvation of this fellow “Neo”.  Neo is “saved” by taking the “red pill”.  The red pill = Truth.  You even have a symbolic representation of Lucifer who tries to foil the whole operation.  Their names are symbolic as well.  It’s frankly rather fabulous that hidden in all the “sci-fi” stuff is this really cool message which can save souls for our King Jesus.

A Message in a Cubicle

So yesterday I am working away at my day job, keenly aware that even I was forced to participate in the Matrix.  Sometimes I think it’s harder to “walk in the spirit” continuously when you must participate in the Matrix.  People that dont’ have to subject themselves to the mental torture of the “work place” can stay in a “force-field”of praise and worship far more easily than those that must put on the earthly facade.  On the other hand even Jesus sat down with tax collectors and sinners in local bistros to tell them the message of salvation.  So if we want to be “like Jesus” then we need to “get to work”.  Amen?

So whenever I would get up from my desk to take a break, I would jokingly say to folks, “YOU ARE IN THE MATRIX”.  It got a lot of laughs.  I said it in a “down low and mysterious voice”.

Yesterday around 4 PM, I stood up to stretch.  When I did, my head popped up over the cubicle like a Meer cat looking for clearance.  The girl on the other side of my work “prison-box” said “What are you doing?”  And I said “I’m a Meer cat looking for enemies, but YOU are in the MATRIX!”  I looked at her with a sinister grin and rolled my eyes jokingly.

She said, “Yeah I liked that movie The Matrix a lot”.

And I said, “Yea but did you detect the “Hidden Meaning”?

Intrigued she replied “No!  What hidden meaning?”

I told her to “Watch this!” and I ducked down behind the cubicle wall for a second and lifted up a napkin with the word “BIBLE” written on it.  I held up the “secret code” and covertly showed her over the prison wall.

In a whispering voice, amongst the ears and eyes of corporate America, I told her about the hidden messages of salvation in the Matrix.  She said to me “I believe in the Bible” and I said back to her “Yea well time is really SHORT!”  She said she didn’t believe that.  I told her “I knew it was”.

The point is that one thing led to another.  She asked me what my favorite chapter was and I told her Matthew 24.  She wrote it down.  Today I suspect there will be some Q&A.  Quietly.

Naturally we will officially be talking about the hidden messages in the movie “The Matrix”.  But behind the scenes the Johnny Appleseeds will be “planted”.

Do you think she will tell her friends?