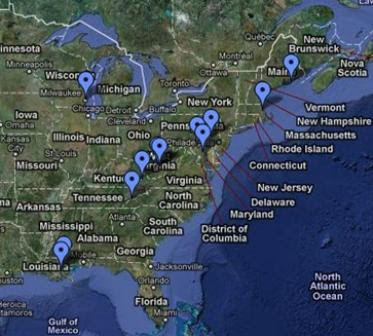 When reviewing all the intelligence coming in against the scripture, and realizing that the beginning of the Great Tribulation is almost certainly on our door step, it seems we may be in for a pretty enormous war in the United State and elsewhere.

There are multiple reports of Chinese troop buildups on the borders of the United States.  While this is nothing new, the reports have intensified dramatically during March.  When you combine this information with the alarming number of “mothership” events (see yesterday’s article entitled “Motherships Arriving” you see what appears to be a possible combined UFO war and foreign troop onslaught mounting.  “They” are dropping off their “cosmic reinforcements”.

Just a few minutes ago, out of the clear blue sky, a still small voice said to me “Look up the word fig in Jeremiah”.

“Because you speak this word,
Behold, I will make My words in your mouth fire,
And this people wood,
And it shall devour them.

15 Behold, I will bring a nation against you from afar,
O house of Israel,” says the Lord.

“It is a mighty nation,
It is an ancient nation,

A nation whose language you do not know,
Nor can you understand what they say.

16 Their quiver is like an open tomb;
They are all mighty men.

(Note: This is OT 1368: Gibborim, Giant, offspring of the Nephilim, “from the heavens they came”)

17 And they shall eat up your harvest and your bread,

Which your sons and daughters should eat.

They shall destroy your fortified cities,
In which you trust, with the sword.

18 “Nevertheless in those days,” says the Lord, “I will not make a complete end of you. 19 And it will be when you say, ‘Why does the Lord our God do all these things to us?’ then you shall answer them, ‘Just as you have forsaken Me and served foreign gods in your land, so you shall serve aliens in a land that is not yours.’

Uhhhmm.  Why does the word “aliens” give me the creeps here?  Sure does seem appropriate when you consider these “things” come from “afar” and from an “ancient nation”.  Sure seems appropriate that the word is used in the context of “mighty men” and Gibborim .. right?  And don’t they pretty much eat everything in site just like the Nephilm (from the Heavens they came) did further back in the Old Testament?  I mean correct me if I’m wrong, but didn’t the Nephilim and their offspring pretty much eat “humans”?

Sure they did.  And yes they will.  Not good.

Here is an interesting link to much of this data complete with scriptures.  If your curious …

The Origins of Demons
http://www.logoschristian.org/demon.html

I’m not saying I agree with all the conclusions on this web page.  I just thought I would toss it out there for you to peruse.

Reviewing Prior Articles of this Nature

However the information included in these articles is VITAL to embrace as it applies to today.  The first article “The United States Ends in 2010? includes some super fascinating information that clearly demonstrates the “Luciferian plan” has included the Chinese army for a very very long time indeed.

Anyone who has done some basic research on the “cabal’s” establishment of the Chinese government knows it was funded by the “dark side” of the Committee of 300 long ago.  In fact, you should also be aware that Carl Marx and the Bolshevik deal was also fully funded and orchestrated by the “blood ritual reptilian freaks”.  This WHOLE DEAL has been planned for “HUNDREDS” of years.  Yep.

But it took me a very long time indeed to piece it all together and understand it was being “saved up” for the Great Tribulation.  Amen?  Wow.

Here is the article entitled:

And here is a follow-up article I wrote when it “hit me” that these “alien-demon” entities were likely going to throw the entire “kitchen-sink” at us all at one time.  And remember, I really hadn’t pieced together the “UFO War” combination punch back then.

And for your end-times reading enjoyment (said tongue in cheek), here is an article I wrote right in the middle of this time frame when it “hit me” that we were actually afraid for “no good reason”.   Funny how that works.

Running from the Kingdom
https://tribulation-now.org/2010/06/18/running-from-the-kingdom/

Also this article is a good one to “build up your Holy Spirit defense weaponry”.

A Quick Review of Our State of Affairs

Here is a quick bullet-point list of some of the things happening right now.  And remember much of this information was prophesied in 2 Esdras 15 complete with wars in the Middle East (prophetic Egypt), Chaldean draconian wars (UFO wars), and a “Horrible Star” in verse 40 which matches up nicely with tons of other scripture.

And don’t get me going on FEMA death camps, FEMA trains and coffins, and “guillotines”.

The list is so huge you would really have to go back like six months to read all the data published here on Tribulation-Now.  Maybe further indeed.

Please Note: If you email me at jbaptist777@gmail.com, I will forward you a combined email sent to me from Christina that includes a sizable amount of links and data on the Chinese troop buildups and other material information.  Much of this comes from Hawk and Quayle alerts, and other data seems to come from additional sources as well.

Here is a link from Steve Quayle’s web site reporting the Chinese troop buildups to wet your whistle:
http://stevequayle.com/News.alert/11_Global/110315.alert.CH.troops.html

The Size of the Problem for “Them”

As pastor Lindsey Williams has said numerous times, the “elite” are behind schedule for their 2012 agenda.  Actually I would suggest that’s putting it a bit “lightly”.   If you have watched the CFR articles and reports over the last 6 years or so, you would see a lot of concerns raised about the challenges of globalization when dealing with the American Congress.  Well good deal.

However these delays do not stop the 2011 / 2012 agenda.  Why?  Because this “cosmic onslaught” is coming no matter what.  There is a reason why the Pope waves to the Orion Star system on Sol Invictus every December 25th.  These freaks have been waiting for their “star buddies” to arrive just like the Mayans were.

And guess what …..  “They’re heeeeEEEEEEEEeeeerrrrrreeeeeee!”

Nevermind all the reports that intergalactic ships have been accompanying Nibiru and God only knows what other cosmic “bodies”.  Never mind Planet X has been consistently referred to as a Prison Planet by the “channelers” and “friends of the Reptilian run “Pleiadian” forces”.  Has it ever occurred to you that if Nibiru is indeed a “prison planet” it might actually contain the Locusts from Revelation 9?  Can you say “Apollyon?”

The War of the Worlds Problem

On Sunday October 30, of 1938, the War of the World radio show was broadcast.  That event was nothing less than a “psyop”.  “They” were testing the waters to see how the people in the U.S. would react to a UFO invasion.  And “they” weren’t happy with the results I can assure you.

Since then there have been numerous attempts to get rid of the guns in America.  Surely by now you have heard all about that.  For more information on these global efforts to disarm the United States citizen, do a search on Alex Jone’s operation at www.infowars.com.

The bottom line is they are behind schedule and they failed to disarm the American public.  This is bad news for the “star gods”.

Take a Look at the American City

Take a good look at the size of the average American metropolitan area.  They are HUGE.  I remember sitting on a chair on a cruise ship in Miami, wondering “how in the world” are “they” going to institute Martial Law with any reasonable success.  Its’ simply not possible.

Von Helton is correct.  He recently published a YouTube video warning to the Chinese government that they dont’ have a fighting chance in Hell of taking over the United States.  He correctly pointed out that even during World War II the Japanese leader was scared to death of attempting a ground invasion in the U.S. because of the number of “armed citizens”.  AMEN.  As Von Helton mentions, an attempt of Chinese troops to enter the United States would result in unbelievable losses to the Chinese.

In fact just this morning I was discussing this very topic with Kenneth in Pennsylvania.  He’s the Tribulation-Now “thought leader” who used to work with Bill Cooper and knows all about this UFO “stuff”.

I told Kenneth, a Chinese troop incursion on America would make Afghanistan look like a bunch of kids with Red Rider BB guns.

We’ve already been front loaded with brain imagery about the futility of fighting an all out UFO war.  Anyone who has seen “Battle L.A.” knows this.  The imagery of the City of Los Angeles being completely destroyed and burning is not something one can get out of their head.  Never mind the astonishing technology advantages of those “alien creatures”.

The feeling one “takes home” with them from such a movie is that “resistance is futile”.

The picture at the top of this article is a map being made of “mothership” encounters.  There are multiple conversation threads about this “thunderous rhythmic noise phenomenon” on Above Top Secret (thanks Chris again).  In fact there are so many of them, they are mapping them on a global level right now.

Here is a link to one of these threads:

Map of Strange Sound Phenomenon Heard Around the World
http://www.abovetopsecret.com/forum/thread678017/pg1

And remember, on sites like ATS and God Like Productions (GLP) there are paid “nay sayers” whose job is to debunk the righteous.  Amen?  So stay focused when you research and remember all the data from all the sources including and especially …

It sure seems to me that we are in for one heck of a WHOPPER of a Great Tribulation.  If only 50% of this material is correct …. look out!  Wow.  However since I’ve been researching this data for about 6 years intensely now (and far longer intermittently), then you can bet I have little doubt in my mind.

0 232
New Bills Screaming through Congress and Other Rants