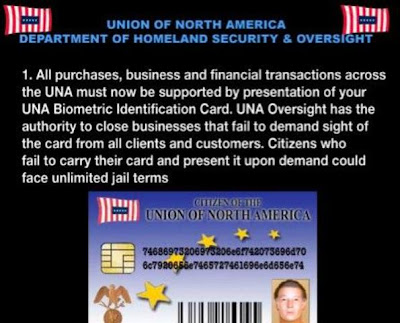 It seems like someone employed by or contributing to the United Kingdoms “Telegraph” web site is getting some insider information on what is happening in the global takeover (rise of the 4th Reich / New World Order). You see the web link above will take you to the Telegraph web site where an “imaginary and fictional” cartoon series can be viewed. As you flip through the cartoon series (1-5 at this time), you see some pretty scary but possible scenarios that could happen. It suggests things like major attacks again in the United States and London.

However what has surfaced in part 5 is shown in the graphic above. As you can see it depicts a North American Union ID card and suggests some ominous requirements for one to possess it (similar to the Mark of the Beast). But what’s really scary is that the long CODE you see across the center of the card actually has a hidden message inside.

If you convert the string shown on the card from HEX to text (ASCII) it says,

“this is not simply entertainment”

I strongly recommend you view these slides and consider the likeliness of their accuracy.

God Bless Us All
—
Matt 24 “…And if those days had not been cut short, no human being would be saved”