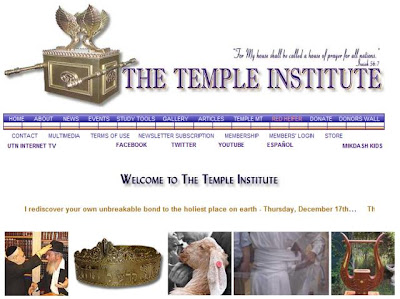 SOLOMON’S TEMPLE IS CURRENTLY BEING REBUILT

A very wealthy and well funded group is in the process of rebuilding Solomon’s Temple. The reports are that they are already in the process of recreating all the “vessels” of the temple so that the new temple is an exact replica of the original. They are to include the sacrificial altars and intend to reinstitute ritual sacrifice. Further reports indicate it is “their” intention to make this the place of the throne of the “new Messiah”. Many believe this will be the actual ruling place of the eminent Antichrist.

Embracing All Religions through Kabbalah

If you take the time to read the material on this site you will see the plan to “unite” all religions of the divine through the Temple. You will see phrases like “all peoples of the world” throughout the web site. Furthermore if you understand the ancient Jewish rabbinical traditions through the Talmud and the Zohar, you will understand the underlying “faith and beliefs” are driven through study and practice of the Kabbalah. This is a type of “belief” based on a universal “god” and “gods” that all religions fit under. Occultists believe the origins of Kabbalah go back to King Solomon himself at the time of his apostasy from YHWH. Kabbalah is also the practice of studying secret messages in the Torah (the original Old Testament scrolls) and it is believed that you will become a type of “god” and be ultimately able to control the power of the universal “Architect of the Universe” through its study and practice. In the higher levels of Kabbalah, it is the practice of divinity (the conjuring of demonic powers) with the ultimate power being that of their “god of light”. Practice of the higher degrees of Kabbalah had been forbidden for years because some had progressed too high and entered into a realm of the highest power before they were properly prepared resulting in their death. Today Kabbalah is a growing religion and has been adopted by millions of new followers as it accepts all faiths and belief systems. Some of the more famous followers of Kabbalah include Madonna and Britney Spears.

The Papacy’s Role in the Rise of the Antichrist

Also it is important to note that the Catholic Church through its ecumenical movement has begun to aggressively embrace all religions of the world. Many believe the multiple “Antichrists” mentioned throughout the Bible were manifestations of the papacy for the last several hundred years making note that under the rule of many Popes (particularly Pope Pius III) the Catholic church was responsible for the death of more Christians and peoples of the world than any other organization that has existed since creation.

This ecumenical movement under the Catholic (Catholic means “universal” in Latin) church has already won the hearts and minds of the great leaders of Hinduism, Buddhism, and particularly Islam. Further study of the origins of the Catholic church reveal religious roots that come from the Knights Templar and the Rosicrucian’s who then founded the Jesuits, Freemasonry and other secret Satanic religious societies. Freemasonic temples are often fashioned after Solomon’s Temple. This mass ecumenical movement, led by the papacy, will enshrine all religions under the umbrella of the “universal” faith and ultimately be led by this group with its ruling center located in the newly rebuilt Solomon’s Temple.

Being Ready Now for Christ’s Return

It is especially important that Christians are vigilant and wise during these times. If you have outgrown your church or do not feel and see the power of the Holy Spirit move through the services you should move on and find a church that is truly ready for Christ’s return (see Acts 2:2). The warning signs of which you must be watchful include open acceptance of all religions and unacceptable practices. Remember you must love the people but NOT their practices or sins. This means you cannot accept their beliefs or welcome those beliefs into yours, or into your church.

It must be a warning to all Spirit filled Christians that we are entering into the time of the final Antichrist and the single world religion. A pre-election speech by Obama stated:

“Whatever we once were […] we’re no longer a Christian nation.” […] Democracy demands that the religiously motivated translate the concerns into universal, rather than religion-specific values … This is going to be difficult for some who believe in the inerrancy of the Bible, as many evangelicals do”

The entire speech, entitle by the Youtube submitter as “Obama vs. Religion” can be watched here:
http://www.youtube.com/watch?gl=GB&hl=en-GB&v=LXcvbnzNIjg&feature=related

The underlying Satanic movement in the world that drives the rise of the Antichrist is extremely powerful and unspeakably wealthy. It is reported by John Coleman, the author of “The Committee of 300”, that some (if not all) of the top 300 members of this occult New World Order ruling class have personal wealth in excess of 400 trillion per person. This Satanic power structure is extremely symbolic in the way they communicate. They speak through hidden meanings and phrases that only the initiate understand. We Christians must understand the power of words like “universal” and embrace the deeper meaning. Universal in this case means without Jesus Christ. Jesus was demoted in the Koran and is no longer the Messiah but only a prophet. Prayers in the Catholic faith are given to the Saints and to their universal intercessor Mary (Isis). Under the new World Religion, there will be a universal “god” and no need for any prophets of the other faiths. Buddha, Krishna, Shiva, Mazda, Mithra AND JESUS will be trivialized under the new faith. And all those who follow, no matter how sincere they believe their leaders are, will not be allowed to enter the gates of Heaven.

Get yourself right with the Lord Jesus Christ NOW – please do not wait any longer.

Jesus saith unto him, “I am the way, the truth, and the life: no man cometh unto the Father, but by me.”