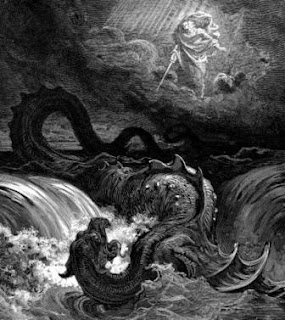 BIRTH PAINS OF LEVIATHAN
The earth’s water is breaking?

An interesting and insightful observation from one of “The List” members of Tribulation-Now, just came in.

If you “stand back” and look at the earth from a “heavenly perspective” it seems as if the earth (the domain of Satan / Leviathan) is beginning to “give birth”. It seems almost as if the earth’s water is breaking. Perhaps as the enemy believes, the “due date” is Dec 21st, 2012 at 11:11 when Orion and Pleiades align perfectly – just as this star system did in the “days of Noah”. (Matt. 24:37)

I am beginning to wonder how much of this stuff is actually YHWH God getting into the battle. Keep in mind as the battle of today unfolds, in August 6, of 1945, there were reports of three Christian priests that survived ground zero in Hiroshima. The power of Jesus TRUMPS all this nonsense!

As Tribulation Now’s email “List” member, Bobbi, points out – the oil spill is one thing, but when you combine “that event” with all the flooding on a global level (worldwide) is looks a lot as if the earth is about to give birth to something. Call it “Leviathan”, or call it “the Whore of Babylon” – this observation may very well be on target.

For we do not wrestle against flesh and blood, but against principalities, against powers, against the rulers of the darkness of this age, against spiritual hosts [demons] of wickedness in the heavenly places [other dimensions now manifesting here on earth].

SHARPEN YOUR SWORDS
Read the Word for it is ALIVE!
The Word of God is far stronger than any evil incantation.
PUT ON THE “WHOLE ARMOR”

PRAISE JESUS FOR HE ALONE IS WORTHY!!!