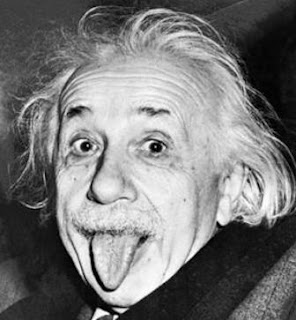 Time is Only and Illusion
Wazup Einstein?

Perhaps I should have woven this article into the Aliens, Demons, Nephilim, Time Travel and God series.  But looking back in retrospect, this topic almost certainly merits its own article.  I think you will agree, Praise Jesus!

It amazes me how these topics just “pop into my head”.  I can’t take credit for them because I am in prayer and praise all day.  And besides, I believe everything is spiritual anyway, so “letting go of self” is not only a Biblical truism but it’s a spiritual must.  Luckily I take pretty good notes when I research things, because on my next “Alien Demon Agenda” article, I have a very interesting “coincidence” to share.  Coincidence?  Hmmmm.

Boy do we have some Splain’in to Do!

Sitting under my monitor at my “day job” I have a Post-It note.  I have always loved “witticisms” and like to write down favorite quotes of amazing people.  Amongst the distractions of “working” with an occasional pause to “praise Jesus” I found myself looking at that note.  And out of the “clear blue sky” came this epiphany.  I don’t know how it suddenly “hit me” like it did.  Or …. perhaps I do.  Maybe it was the Holy Spirit.

You see, deep down inside I have been troubled.  My research, quite frankly, has uncovered a few things that I have not been able to explain to myself adequately.  These “unexplainable” things bug the heck out of me.

For example, today I found myself skimming an article on the “technology” behind the Tower of Babel (thanks Loren … again!).   It was pointed out to me that the Tower of Babel has been connected via assumptions to Babylon, when there is a reasonable level of likelihood there is little or no connection at all.  During my down time at work, I searched on “technology tower of babel” and stumbled across an article.

Why did I include the word “technology”?  Well because there HAS TO BE a reason why God kiboshed the building of that structure.  And if you think about it a little, it doesn’t make SENSE that the structure was just bunch of stacked “ziggurats”.  There had to be something “threatening” to YHWH God about that structure.  It made him pretty angry.  It wasn’t just another one of those “high places”.  “They” were trying to reach “their” buddies.

I am not going into a long diatribe about the theory of relativity.  If you don’t understand that “time” has been proven to be a “variable” in our dimension, then you will either have to take my word for it or get yourself a book such as “Einstein for Somewhat Challenged Folks” (I jest).  Suffice it to say the science community has more than adequately PROVEN that time is a “variable” … not a constant.  This is SIGNIFICANT  if you expect to face “head on” the Satanic onslaught that is coming to disprove the Word of God.  I hope to show you why.

On my Post-It note is one of Einstein’s most famous quotes:

“The distinction between past, present, and future is only a stubbornly persistent illusion”

Now this is a CRITICAL concept for you to wrap your arms around.  This means that our entire “space-time continuum” is unique to US ALONE.  What?  Okay let me put it to you this way.  Those of us who live on the earth and in this dimension have a unique “physical characteristic” over-layed upon our “reality”.  This “characteristic” is TIME.

One again I will spare you the “physics” of Quantum Mechanics.  Frankly its pretty darn boring stuff and I am not at all good at math so I don’t have the slightest chance of explaining it to you.  What I can tell you is that the science of quantum mechanics, or quantum physics, currently estimates there are AT LEAST eleven possible dimensions.

To make matters worse, evidently one of the “constants” that quantum physics has been depending on thus far is the “speed of light” which recently was called into question.  Evidently scientists are befuddled because they were able to prove that light really doesn’t move at 186,000 miles per second, but instead seems to be omni-present at multiple places at one time.  In fact, quantum science had previously proven that certain “quarks” or “tiny particles” exist in more than one place at the same time too.

Sounds GREEK TO ME!

So does the Septuagint!  But the apostle’s figured it out (tongue in cheek).

Dare they NOT Debunk the Word of God!

Here is what has been “bugging me” all this time.  And PRAISE JESUS today the answer to this quandary “hit me” like a ton of logs.

As I was reading about the Tower of Babel, I noticed a link in the article to the “Enuma Elish”.  I had heard about the Enuma Elish in my previous studies.  The Enuma Elish is an ancient document written in cuneiform script on clay tablets from something like 2,000 B.C.  The Enuma Elish, is a “creation account” that has some similarities to God’s creation account in the Pentateuch.  You can see it here: http://www.crystalinks.com/babyloniancreation.html.  So “naturally” the author of the article points out that such “evidence” implies that “perhaps” such ancient writings might “call into question” the validity of the Bible.

AFTER ALL – WHICH CAME FIRST?

If you really want to have your “faith shaken” (if it were possible … could we be the “Elect”?), get yourself a copy of “Origins and Oracles: Atlantis, Alien Visitations, and Genetic Manipulation” by Michael Tsarion.  I remember when I sat through the entire 10 hours of advanced lectures on this subject matter I was “emotionally crippled”.  Tsarion does not believe in Jesus and even uses the Book of Enoch to support his contrivances.  It is an utterly horrible experience for a Christian to go through.  But Praise Jesus I did it.

Some of the “mythos” we are faced with debunking is nothing less than extremely challenging.  Each of these “well documented” ancient accounts “copy cat” the Lord Jesus Christ and ultimately attempt to “dethrone” the KING.  It is most troubling to even hear about such “writings” as it is very hard  to accept that they even exist.

Some of these ancient historical writings include:

While the movie Zeitgeist is actually a great movie that does an excellent job of capturing the whole “New World Order” scam, “Part One”

But since you will eventually face this (and more) deception, you can listen to the lies here (if you want).  Personally I hate hearing it because it pisses me off.

The Movie Zeitgeist – Part One
“The Greatest Story Ever Sold”

Debunking with the Chicken vs. Egg Paradigm

So after I studied all this troubling information, I went off to “debunk” it and all I had at my disposal was TIME.  All I could do was hope to prove that each of these “ancient writings” did not actually claim all those similarities to Jesus as far back as 3,000-6,000 B.C.

And sure enough, after quite a bit of hard work and searching, I was able to find some brave researchers that believed they could “at least” debunk the Mithra story of Persia by showing that most of the “details” that were similar to Jesus’ story were “added” long after the original Mithra story was established.  And in fact if you listen carefully to the dialogue in the Zeitgeist story, you can detect the likeliness this “could be the case” by what the speaker “briefly” says.

But TIME is only Part of Our Dimension!

We assume so much don’t we?  Through our tiny little peanut brains, many people think that the Bible only covers 6,000 years of recorded human history.  WOW.  We give GOD so little credit.  Can anyone reading this article tell me in all honesty that you have any concept of ETERNITY?  If you say yes … you aren’t being fair (and that’s putting it nicely).

I call your attention to “The Montauk Project”.  I call your attention to “The Philadelphia Experiment”.  Some of the people who were involved in these TRUE events, are still alive.  They have something to TELL YOU if you just listen.  And guess what?  That is only what we HUMANS have been able to figure out.  And some strongly suggest we did NOT figure that stuff out by ourselves.  There is much credible evidence these technologies were “given in trade” to the U.S. government so that we would keep our mouths shut about the “alien – demon” problem.

Wait until I tell you what happened to me while I was studying a lecture on the “Billy Meier Story” and the “prophecies” given to him by the Pleiadians.  These “fun and friendly” human looking folks told Mr. Meier all about the IRAQ war long before it happened.  Mr. Meier even wrote official letters to several governments about what he was told.  These letters are a matter of record.  But wait until you hear “The REST OF THE STORY!”

Summary of the Complex Time Problem

Time is not complex.  It only “seems” like it is a constant.  When you let go of TIME being such a “big deal” then NONE of this “malarkey” is a problem for the believer in JESUS to tackle.  It becomes amazingly simple.

And one more thing.  This is a critical addition.  In fact, so much so, that I just woke up at 2:15 AM to add it.  Please don’t forget that God is in control and the Holy Spirit, among other things, is the “restrainer”.  This means “they” have “limits” to what they can do within their own dimensional time contraints as well.  I don’t know what these limts are, but it is a certainty to know that God is the only true “eternal” and Most High being.  Please never forget that.

And never mind that Jesus wasn’t born on December 25th anyway and their miserable attempt to STEAL our King’s birth date will only fool the foolish.

9 thoughts on “Debunking the Debunkers (where x = time)”