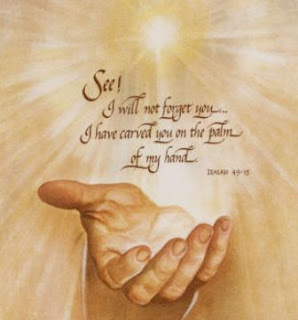 Isaiah 49:15
“I will never forget you, I have carved you on the palm of my hand”

If You Don’t Listen
You won’t hear …

It seems, sadly so, that “christianity” (lower case intended) has slipped into a crevasse of trapped thought.  We have been trained to think “inside the box” at all times.  When one really studies the Bible a divine revelation jumps off the pages.  If you don’t let yourself get snared in a trap associated with “Law vs. Grace”, or which prophecies are “symbolic” verses “literal”, you see another truth that is missed by virtually everyone.

The Bible was never intended to be the “Final Word of God”.  This is why you see the words “I reveal this mystery to you” all throughout the text.

WHAT MYSTERY?  HOW MANY ARE THERE?

Never mind when John was seeing the visions of Revelation there is an entire sequence of events he is told he must not write down.  What do you supposed those events are?  When do you think those “secret mystery” events will unfold?  Is it possible these events unfold during the very “end of times” here on earth?  Is it possible these mysteries will happen in our life time?  Could it be that God will unfold these mysteries to the most unlikely people?

I challenge you, in Jesus name, to “break out of the box”!  You are going to miss your shot at a piece of the “divine pie” if you are trapped in the “pigeon hole” that most traditional Christian leaders are shouting from.

Never forget, amidst the future unleashing of divine events, most people will be completely asleep at the wheel.  Try to understand the “twinkling of an eye” warning.  Try to grasp the “paradox” associated with Jesus’ warnings in the Olivette Discourse.

Think about this paradox here:

Did it ever occur to you there are duplicitous dynamics at work in these three verses?  Most of Christianity embraces the notion that these three verses simply support the “twinkling of an eye” paradigm.   But the deeper thinkers out there realize that verse 37 is LOADED with parallelisms.

So how is one to embrace this paradox?

THERE ARE A LOT OF THINGS WE WON’T SEE

There are a lot of things that most of “Christianity” will
NOT EXPERIENCE
if they
DON’T WAKE UP!

Responding to the Flow

Think about the spiritual dynamics in play here at Tribulation-Now.

Some are shaking their fists in the air. Simmons was murdered, Tsunamis are coming, death and destruction.

While this dynamic is occurring, Tribulation-Now’s people are emailing me. Look at the procession of articles in the order they were published.  I did not notice this until just this morning.

When God’s Special Forces was published, a demon started to email me viscous assaults. I sent some of them to a colleague of mine just to show him the “dark side” of paying attention to people’s “input”.  This is tricky business, writing these articles.  You have hundreds of emails coming in.  People need prayer, people are demonically attacked, people are demonically “attacking”.  It can be a bit distracting I assure you.  Couple that with a “day job” and family life and you can become mentally fatigued very quickly.

The last three days have been exactly that … exhausting.

NEXT I get sent the prophecies from this young guy, Lewis Crompton, from one of our more gifted contributors Heather. Heather didn’t send them to anyone but me as far as I know.  At least, I was the only one in the “to” field of the email.  Prior to reading her email I had already authored and published “A Change in Priorities” and “When God Says Thanks” and I was about to leave for work.  But I don’t like to leave until I have finished going through most of the emails.

Then I open Heather’s email.  I start reading Crompton’s prophecies.  My eyes become instantly affixed to the text.  This wasn’t the usual “fluffy stuff” you get from “The Elijah List” – this was DEAD ON!  And if you read the comments section under this article you can see that people were on “both sides” of the fence regarding this word.

The more traditional believers felt Crompton was too young and he used “lingo” which God wouldn’t use.  But when you  know how God prophecies through “people” and have been around it all your life you realize that this is EXACTLY HOW IT WORKS.

You don’t drop your Southern accent when God speaks through you!  The characteristics associated with how you speak will “often” come out in the language you use to “relay” the words God has laid upon your heart.  Not all of prophetic utterances are “YEA SAYETH THE LORD” … we better watch our our established “belief systems” and attitudes and LISTEN IN JESUS NAME.

I read the email and published it immediately because even though I had already published 2 other articles that same morning, I felt a HUGE PUSH to publish the Lewis Crompton material.  I really needed to get to work.  I was running very much behind schedule.  I emailed my associate a copy of the Crompton prophecy and asked him to remind me to publish that work soon.

But I was unable to leave my chair.

I immediately started to publish his work.

EXTRA BIBLICAL DOES NOT MEAN UNBIBLICAL

I warn anyone that will open their minds and listen, it is people LIKE CROMPTON the Lord has NO CHOICE but to speak through as things become EXTRA BIBLICAL.

Do not forget that the Bible NEVER SAYS that all knowledge comes from only within its text. It is a “MAP” of truth, but it is not the only source of truth. This is why there are mysteries that were locked up and stated so in the Bible.

These mysteries are yet to unfold.

6 thoughts on “Stand By for "The Sacred Words"”