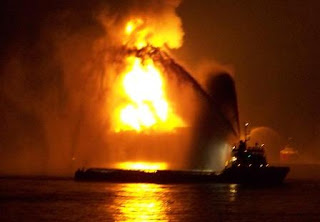 The Second Trumpet?
Maybe Not So Far Fetched After All

When Tribulation Now released the first article on the Deepwater Horizon disaster (entitled “The Second Trumpet? The sea became blood“), it met with mixed levels of feedback.  Perhaps I read too much into what people say in response, then again, perhaps not.  On one hand I was told it was an excellent observation.  And quite frankly, it had not immediately occurred to me.  Someone from Tribulation Now’s email “List” had brought up the possibility some weeks ago, and I was unable to find the email to give them credit (It was Jeff D. – Praise Jesus for you Jeff!!). NOW it appears that person may have had some almost “divine” insight.  Then on the other hand, I got the impression from others that I was “jumping the gun” on such a notion.  No surprise there.  You cannot report on this type of controversial “cutting edge:” news without an occasional “get out of here” remark.

As usual the regular news media (controlled by the demonic Rothschilds through their ownership of Reuters and the AP News groups), is dumbing down the problem.  Much of it is not being reported at all.  But evidently this has the potential to become the “worst disaster in the history of the world”.

Some of the facts include these horrific statements from BP themselves:

Attorney, Rick Kuykendall, a BP spill class-action suit lawyer says, “This is not a disaster.  THIS is a CATASTROPHE“.

What Happened to the Fail Safe?

What you are not hearing from your friends at Fox News or ABC, CBS, CNN, or NBC is that BP was given a waiver on the installation of a fail safe mechanism.  BY WHOM do you SAY?  Get this!  By the Bush Administration’s, Mineral Management Service, headed up by what was called the “Closed Door Dick Cheney” policy.  Are you starting to make the connection yet?

The fail safe, which is required in every other part of the world, was not installed by BP for the Deepwater Horizon due to a “hall pass” given by Dick.  This is the same guy that “accidentally shot” a fellow hunter in the face.  This is the same guy who is evidently a distant blood relative of Obama through his mother.

The name of the Fail Safe is called the Acoustic Switch Blow Out Preventer.  It costs a mere 500K to install.  This is a tiny percentage of the cost of the entire Deepwater Horizon project and is currently in place in every other country in the world … except … hmmmm … the United States.  Makes you scratch your head, doesn’t it?

“Government First Responders were there and BP told them “This isn’t going to be that bad.  We got it under control” – and the people left”

TO THIS DAY, NOBODY KNOWS WHAT HAPPENED TO CAUSE THE “EVENT”

Here are some things to consider:

At last view, the oil slick has moved deep into the gulf ocean current “LOOP” which means its progress cannot be stopped.  It is now 100% inevitable the oil, with its benzene poisonous gas (and other deadly chemicals being added by BP from air planes), it going to spread to other parts of the world.  First the Florida Keys, then on to the East Coast of the US.  Then literally to the rest of the world. The sky is the limit. “My question to the BP President Lamar McKay is, Why weren’t there any preventative measures put into place?  You JUST KILLED OUR ENTIRE PLANET!  I hope you’re happy!”

When I made the allusion to the $10 dollar bill prophecy in the article Aliens, Demons, Nephilim, Time Travel & God (Part Four), I really didn’t think that was likely.  I pray to Jesus it is still NOT likely.  I live in a place that will probably not exist any longer if this is the option these people choose.  I can only imagine, with all the bumbling that has occurred thus far, the side effects that would certainly happen if this option is executed.  The nuclear option.

No I am not kidding 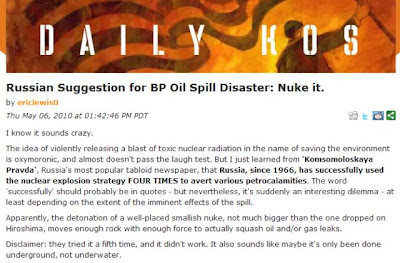 The idea of violently releasing a blast of toxic nuclear radiation in the name of saving the environment is oxymoronic, and almost doesn’t pass the laugh test. But I just learned from ‘Komsomoloskaya Pravda’, Russia’s most popular tabloid newspaper, that Russia, since 1966, has successfully used the nuclear explosion strategy FOUR TIMES to avert various petrocalamities. The word ‘successfully’ should probably be in quotes – but nevertheless, it’s suddenly an interesting dilemma – at least depending on the extent of the imminent effects of the spill.

Apparently, the detonation of a well-placed smallish nuke, not much bigger than the one dropped on Hiroshima, moves enough rock with enough force to actually squash oil and/or gas leaks.

Disclaimer: they tried it a fifth time, and it didn’t work. It also sounds like maybe it’s only been done underground, not underwater.

I’m Prepared Spiritually – Are YOU?
I am heading out with my wife to the beach for some sea food.
Tonight I will remember to thank Jesus for my food.
HOSANA – SAVE NOW!!
IN JESUS NAME!